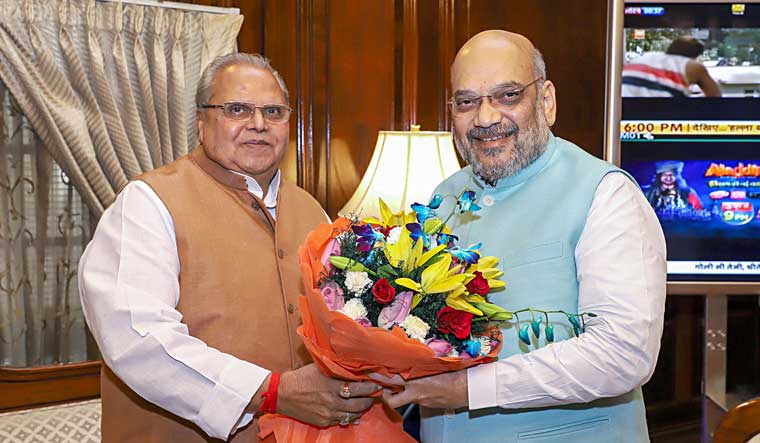 Buoyed by its wins in all three seats in Jammu and Ladakh regions in Jammu and Kashmir in the Lok Sabha election, the BJP is now reportedly planning to lift the freeze on the delimitation of assembly constituencies in the state.

The last delimitation exercise happened in 1995 when Jammu and Kashmir was under president's rule due to militancy. The Constitution calls for delimitation after every 10 years. This didn't happen in 2002 as the then-ruling National Conference government, which had a two-thirds majority, amended the Representation of the People Act, 1957 and Section 47(3) of the Constitution of Jammu and Kashmir and put a freeze on delimitation till 2026. The party reasoned the move was in line with the freeze on the delimitation of constituencies in the whole of India till the first census after 2026.

The amended Section 47(3) provided "that until the relevant figures for the first census taken after the year 2026 have been published, it shall not be necessary to readjust the total number of seats in the Legislative Assembly of the state and the division of the state into territorial constituencies under this sub-section". The Jammu-based Jammu and Kashmir National Panthers Party challenged the move in court. But both the Jammu and Kashmir High Court and Supreme Court upheld the decision of the NC government.

The Supreme Court had, in a judgement, said courts cannot interfere in matters of delimitation as there was an express constitutional bar on such interference.

The BJP's ally in Jammu and Kashmir, the Peoples Conference (J&KPC) led by Sajad Lone, also polled the second-highest number of votes in Baramulla Lok Sabha constituency in north Kashmir. The J&KPC led in two assembly segments of Baramulla. This gives the BJP-J&KPC combine a lead in 32 assembly segments in the state.

But that is where the BJP's prospects of forming a government in the Muslim majority state end, as a minimum of 44 seats are needed to form the government. To overcome this limitation, the BJP is reportedly planning to end the freeze on delimitation through State Governor Satya Pal Malik. During president's rule, legislative authority is vested in the governor. The last delimitation on the provisional basis was also done by then-governor Jagmohan Malhotra in 1993 when the state was divided into 87 assembly constituencies.

The BJP is hoping that since Jammu has more area than Kashmir, it would get more seats under delimitation than Kashmir. According to the 2011 census, the total population of Jammu region was 53,78,538, of which Dogras are the dominant group, comprising 62.55 per cent of the population.

So, while Jammu has more area, Kashmir has a greater population. Also, in Jammu, there are at least 10 assembly seats in the Chenab valley and Pir Panjal regions, where Muslims constitute a majority. More seats to Muslim majority regions in Jammu may not suit the BJP's plans. The party is also raking up the issue of political reservation for Gujjars, Bakerwals, Gaddis and Sippis, who form 11 per cent of the population and were given scheduled tribe status in 1991.

At present, seven seats are reserved for scheduled castes in the Jammu and Kashmir Assembly, all in the Jammu region. These haven't been rotated since 1996. These seats are Chamb, Domana, Ranbir Singh Pura, Samba, Hiranagar, Chenani and Ramban.

The delimitation plan is considered to be a brainchild of Amit Shah, who after being sworn in as home minister, called a meeting on Jammu and Kashmir. As per reports, the question of delimitation in Jammu and Kashmir came up for discussion in the meeting. Shah has already had a closed-door meeting with Governor Satya Pal Malik.

Kashmir-based political parties like the NC and the PDP have voiced serious concern and opposition to the proposed move of delimitation. NC president Omar Abdullah said in a tweet that the freeze on delimitation has been applied to the entire country until 2026, contrary to the way “some ill-informed TV channels are trying to sell it”. “It isn’t just a Jammu and Kashmir specific freeze,'' he said. “The BJP, which talks about bringing J&K on par with other states by removing (Article) 370 & 35A now wants to treat J&K differently from other states in this one respect,” Omar declared.

In another tweet, Omar said, ''When delimitation takes place in the rest of the country the BJP is welcome to apply it to J&K until then we in the @JKNC_ will oppose, tooth and nail, any attempt to make changes without a mandate from the people of the state.”

Reacting to the reports of delimitation, the PDP president, Mehbooba Mufti, said in a tweet that she is “distressed to hear about GoIs (Government of India’s) plan to redraw assembly constituencies in J&K. Forced delimitation is an obvious attempt to inflict another emotional partition of the state on communal lines. Instead of allowing old wounds to heal, GoI is inflicting pain on Kashmiris”.

Former chief minister Ghulam Nabi Azad had toyed with the idea of setting up delimitation commission but could not push forward after his ally, PDP, resisted the move.

Legal experts opine that while governor can pass an ordinance to end the freeze on delimitation, the move needs concurrence of the Parliament within six months, but the BJP doesn't have a majority in Rajya Sabha.

The feeling in Kashmir is that the delimitation proposal is communal and aimed at further dis-empowering the majority.

If the BJP succeeds, essentially, 30 per cent minority(non-Muslims mostly Hindus) in the state will rule over 70 percent majority Muslims. Such a move would reinforce separatism and alienation among the majority in the state.