Bill to ban triple talaq to be introduced in Parliament again 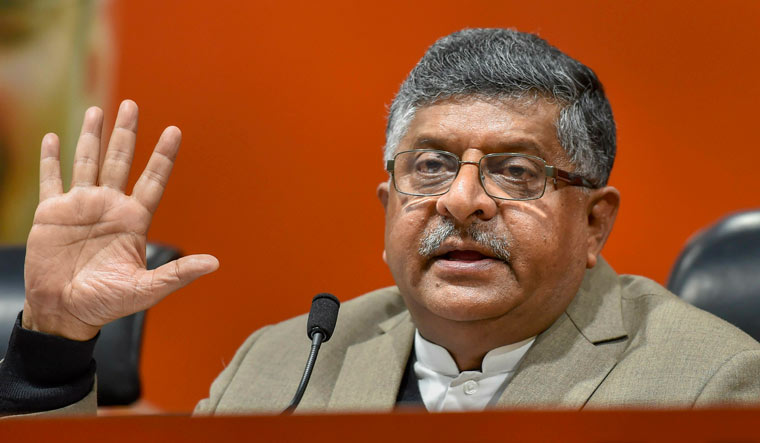 The contentious bill to ban the practice of instant triple talaq will be introduced again in Parliament, Union Minister for Law and Justice Ravi Shankar Prasad said on Monday.

The bill, introduced during the previous term of the Narendra Modi government, lapsed with the dissolution of the 16th Lok Sabha. Though it was passed by the lower house, it was still pending in the Rajya Sabha, where it could not be passed as the opposition protested against bringing triple talaq under the ambit of criminal law. They demanded that the proposed law be sent to a standing committee.

Bills that are initiated in the house of the people but that stay pending in the Rajya Sabha lapse upon dissolution of the Lok Sabha.

In response to a question on whether the government was planning to re-introduce the bill in Parliamentt, Prasad said, “Obviously. Triple talaq is a part of our manifesto. Why not?”.

The bill has wider political ramifications, with the ruling party projecting it as a move aimed at giving Muslim women justice. Opposition parties, which the BJP accuse of indulging in minority appeasement, have walked the tight rope on the issue. They opposed the proposed legislation on technical grounds, questioning how could matrimonial matters, which traditionally lay in the purview of civil law, could be brought under criminal law.

The Muslim Women (Protection of Rights on Marriage) Bill, which was brought in by the previous Modi government, made instant triple talaq a crime under the Indian Penal Code, providing for a jail term for the husband. As the bill could not be passed in the Rajya Sabha, the government promulgated an ordinance twice to bring the legislation into effect.

To a question on Uniform Civil Code, which the Modi regime has been keen on implementing, Prasad said the government would hold political consultations on the issue and also study the recommendations of the Law Commission in the matter.

Meanwhile, in the backdrop of a tenuous relationship between the government and the judiciary on the issue of appointment of judges to the higher judiciary, Prasad said his ministry will not act as a mere “post office” but will strive to be a stakeholder in consultation with the Supreme Court and high courts.

“The law minister and the law ministry are stakeholders, obviously giving due regard and respect to the collegium system... We have a stake and we will continue to pursue that stake in consultation with the Supreme Court and the high courts to expedite the appointments,” Prasad said.

There was a spurt in the tension between the government and the judiciary as the Modi regime, on numerous occasions, returned recommendations for judicial appointments to the Supreme Court collegium. There was unease in the higher echelons of the judiciary over the government allegedly sitting over the collegium's recommendations for appointment of judges to the Supreme Court and the high courts.

Prasad also emphasised on the need to set up an All India Judicial Services to fill vacancies in the lower courts. “We want good people to join the judiciary. The selection process should be more merit based. Deprived sections should enter the service based on merit,” he said.