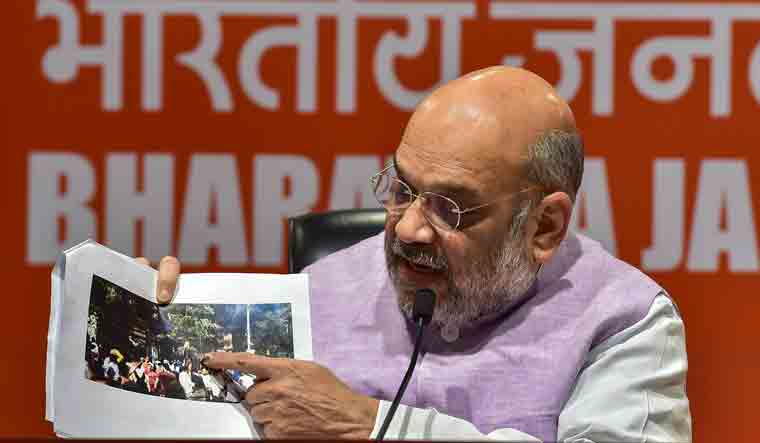 “Had the CRPF been not with me, it would have been difficult for me to escape the attack,” Shah said at the hurriedly called press conference at the party headquarters. The BJP chief also showed pictures of the “attack".

Shah refuted Mamata Banerjee's allegations that the attack was carried out by BJP workers. “Six phases of elections have passed off peacefully except for Bengal. Mamata Banerjee has accused BJP of violence, but I want to tell her that she may be contesting on 42 seats, (while) we are contesting all over the country and against all parties. There has been no incident of violence. The violence has taken place in Bengal, because Trinamool is there,” he said.

After violence erupted during Shah's roadshow, the Trinamool accused BJP workers of destroying the statue of Ishwar Chandra Vidyasagar, a 19th century philosopher. Shah countered saying it was the TMC cadre who did it to pin the blame on the saffron party.

Mamata Banerjee responded by using Vidyasagar's picture as her display picture on Twitter. Shah said Banerjee is doing this to gain sympathy. “It is they who have destroyed the statue to gain votebank. But it shows their countdown have begun. The BJP had no access to the statue, it was the Trinamool goons who destroyed it,” Shah charged.

Violence erupted in West Bengal as Lok Sabha elections reached its last phase. Earlier, BJP leaders had accused the state government of not allowing their aircraft to land in the state when they went there to hold rallies.

“You may be elder than me in years, but Didi, I have more experience than you to hold and contest elections,” Shah said as he claimed the BJP will win over 23 seats in West Bengal and more than 300 seats across the country.

“I can say with confidence that by the fifth and sixth phases, the BJP had crossed the majority mark. But by the seventh phase we will cross 300 mark,” Shah added.