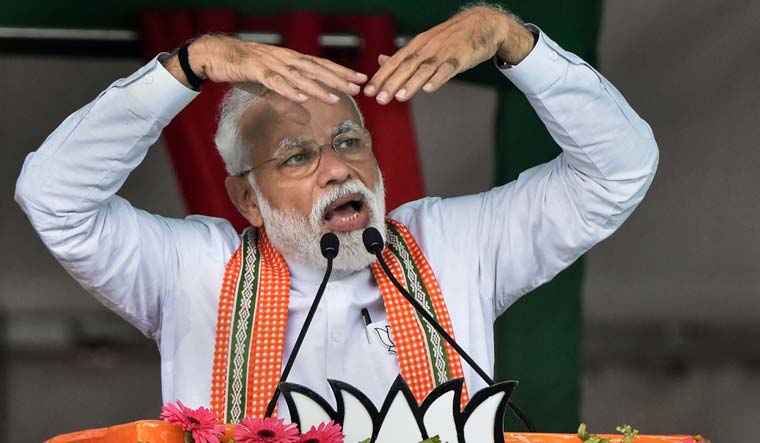 Prime Minister Narendra Modi addresses an election rally ahead of the Lok Sabha polls, in Bhagalpur on Thursday | PTI

In an interview conducted with the TV channel News Nation, Prime Minister Narendra Modi claimed that the Balakot air strike timing was influenced by his suggestion that the overcast weather could help hide the Indian planes from radar.

According to the prime minister, “The weather suddenly turned bad, there were clouds... heavy rain. There was a doubt about whether we can go in the clouds. During a review, by and large the opinion of experts was — what if we change the date. I had two issues in mind. One was secrecy. Second, I said I am not someone who knows the science. I said there is so much cloud and rain. There is a benefit. I have a raw wisdom, the clouds can benefit us too. We can escape the radar. Everyone was confused. Ultimately I said there are clouds... let us proceed.”

He also said, “I am surprised that the country’s pundits who abused me never figured this out.”

The bad weather on the day of the strike was one of the factors preventing clear footage and field reports from emerging in the aftermath. However, whether the weather can prevent radar systems from functioning is heavily contested, with defence journalists, opposition leaders and Twitter journalists alike poking fun at the PM.

While cloudy weather can affect military readiness, such as by preventing bombs like the Crystal Maze from deploying their video feeds, it will not have as much of an effect on military radar systems. Military radars can operate on low frequencies that can see through cloud cover.

In less than a day, Congress spokesperson Sanjay Jha referenced Cloud 9, Uri: The Surgical Strike, Avengers: Endgame, iCloud, and multiple memes on his Twitter account, having a field day with cloud-based material at the PM’s expense under the hashtag #EntireCloudCover.

Cartoonists swiftly turned the PM’s claim into a meme, with cloud-based humour being the flavour of the day.

Many tweets and memes poked fun at the PM’s understanding of radar.

Why did Modi ally with Badals?
To escape radar.

Official BJP handles had tweeted a link to the interview along with a translation of the PM’s statement. These links have since been removed.

CPI(M) General Secretary Sitaram Yechury has written to the Election Commission demanding action against the PM, on the grounds that he gave out sensitive “operational details” with the intent of “influencing voters”.

Modi's ridiculous comments on radars, clouds and fighter jets have been deservedly mocked but the EC needs to act against him for invoking armed forces hours before the sixth phase of voting. Letter to EC asking for prompt and strict action on this flagrant violation. pic.twitter.com/yVDr0emlJM

In addition, the letter adds that the Model Code of Conduct does not allow for the armed forces to be the subject of hyperbolic and false claims.