Kerala: Does high voter turn out spell bad news for Left and BJP?

Political pundits hint at minority consolidation against the Modi government 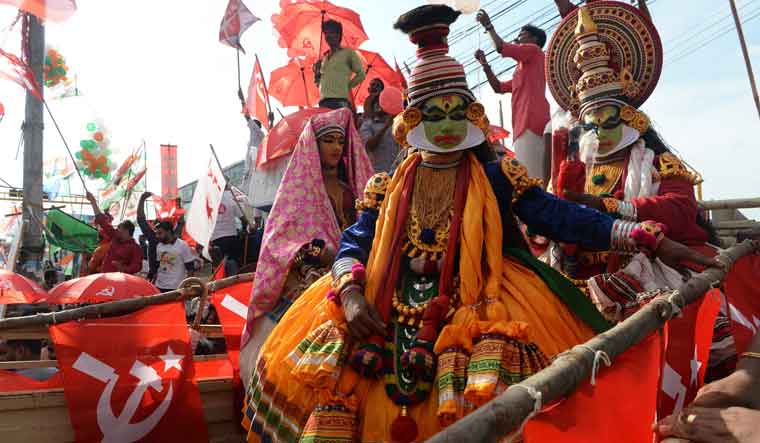 While political pundits are scratching their heads to make a sense of the high turn out, every political front has claimed that the verdict is in their favour in Kerala | AFP

Keralites have always celebrated elections and its vote share has always been much ahead of the national average. The celebration reached a real high peak this time with the state recording 77.68 per cent voter turn out during Tuesday's polling.

While northern Kerala registered higher turn out than the central and southern constituencies, the figure was the lowest in the the capital constituency of Thiruvananthapuram (73.37 per cent) that witnessed one of the most high decibel contest. Here, sitting congress MP Shashi Tharoor was one of the candidates.

The highest turn out was in the politically volatile constituency of Kannur district where the Congress and the CPI(M) were having a direct fight. Second came Vadakara constituency, followed by Wayanad where Congress president Rahul Gandhi is contesting.

While political pundits are scratching their heads to make a sense of the high turn out, every political front has claimed that the verdict is in their favour.

“The huge turn out proves that there was a wave in favour of the UDF. High vote percentages have always helped the UDF,'' senior Congress leader A.K. Antony said about the polling percentage. Similar claims were made by CPI(M) leaders, too. “The LDF will taste a historic success this time. High turn out reflects the determination on the part of the voters to protect secular and modern democratic values,” said Kodiyeri Balakrishnan.

Amid these claims, it is a fact that the high voting percentage reflects a strong undercurrent in this election.

The most palpable one seems to be a minority consolidation, especially that of Muslims, against the Modi government. The huge turn out of Muslim voters, including women, at polling stations right from the beginning is proof to the fact that the community had taken a collective decision this time. Such a consolidation, in a normal analysis, should be in favour of the Congress-led UDF.

“A strong wave among Muslim voters would ensure that the Left will lose even its bastions. Its tally could turn pretty bad,” said CMP leader C.P. John. CMP is a UDF constituent. “In the last assembly elections, the community had voted in favour of the LDF and they won. But this time they have voted against Modi and that vote should naturally go to Congress-led UDF,” he said.

The “fear factor” that the minority communities, especially Muslims, share against the BJP government is, indeed, considered to be a key factor that contributed to the huge turn out. Most observors say this is evident in the heavy polling in all constituencies in Malabar and also in coastal belts where the community has a stronger presence.

That said, it is also difficult to decipher a pan-Kerala pattern among Muslim voters.

“Both Malappuram and Ponnani which are IUML bastions defy the pattern because there may not be a strong fight there,” said John.

At the same time, some also attribute the high turn out to the CPI(M) machinery, which ensured that every Left vote was polled. “The CPI(M) has worked as a well-oiled machinery this time as they knew the challenge ahead with both the Congress and the BJP out to finish them. So unlike the last time when they concentrated only in the CPI(M) constituency, the party worked hard this time. The turn out is also due to that reason,” said Saju K., a journalist.

While both the reasons could be possible, it was a fact that there was a huge turn out of women, from both majority and minority comunities. Many attribute this to the Sabarimala issue which had been the single-most agenda in this election. Most people attribute the presence of women, especially that of Hindu women, as a vote against the LDF since the state government had facilitated the entry of women after the Supreme Court verdict that allowed entry of women of menstrual age into the hilltop shrine. Both the Congress and the BJP in Kerala had rallied against the government for “hurting the religious sentiments” of Hindus following the government's efforts to implement the SC order.

But some see the increasing presence of women as a gesture in support of the “modern approach” of the Pinarayi government. “Yes, there were more number of women and Sabarimala could be a factor. But it is too early to say whether the women voted against or for the Left government. It could go either way,” said Sajad Ibrahim, Head , Political department, Kerala University.

He also felt that it was wrong to say that the high turn out would be in favour of the UDF alone. “It is a fact that there is a strong anti-Modi sentiment across the state. Both the Congress and Left could benefit out of this,” he said.

According to him, it is the local and immediate concerns that impact the voters while casting their votes. Barely, 25 per cent consider the national issues while voting.

But the general theory is that high voting happens when there is an anti-incumbency. In Kerala there is a possibility of two anti-incumbencies—one against the BJP-led Centre and the other against the state government over the Sabarimala issue. As both the BJP and the Left are at the receiving ends of these waves, the Congress-led UDF would, in all likelihood, reap the harvest of the high voting percentage in Kerala. No amount of constituency-level micromanagement by others would be able to stop a wave once the voters are determined.