West Bengal: BJP, TMC accuse each other of using polarisation 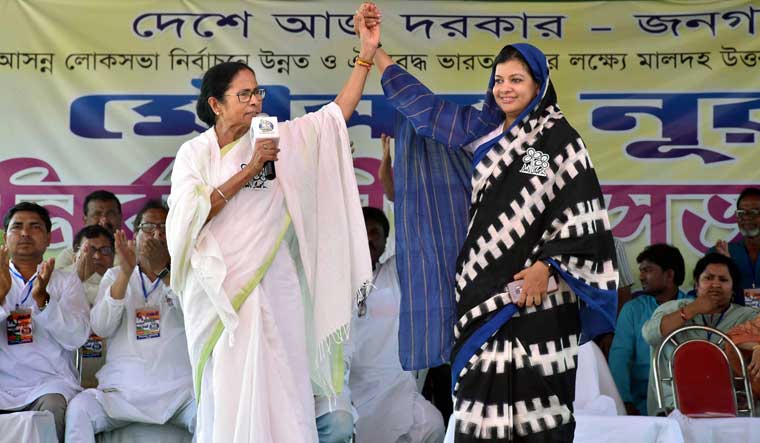 West Bengal, where the electoral discourse has largely steered clear of communal politics, has been drawn into the vortex with the TMC and the BJP accusing each other of resorting to polarisation to get a larger share of the pie in the 2019 Lok Sabha polls.

A minor player in the state till a few years ago, the BJP is emerging as the new main opposition party, pushing the once formidable Left and the Congress to the fringes. The saffron party holds only one assembly seat and two of the 42 Lok Sabha seats in West Bengal, where ideology and people's problems have traditionally been the poll planks, but hopes to better its tally this time.

BJP president Amit Shah has set a target of 23 seats for the party in the state where Mamata Banerjee's TMC has held power since 2011.

Admitting that religion and caste have pervaded West Bengal politics, veteran TMC leader and state Panchayat Minister Subrata Mukherjee held the BJP responsible for the import and asserted that his party is only countering the former's narrative.

BJP state president Dilip Ghosh denied the charges and, in turn, blamed the TMC's alleged appeasement politics for communal tensions in the state.

Both the TMC and the BJP are working hard to woo the Matuas, a scheduled caste community, mostly comprising backward class Hindus who migrated from Bangladesh.

The community has a significant presence in seats in North 24 Parganas and Nadia districts of south Bengal. Matua votes also hold the key in the neighbouring Ranaghat and Barrackpore constituencies.

Following Binapani Devi's death in March, her family has been divided over its political leanings.

Mamata Bala Thakur, widow of Binapani Devi's elder son Kapil Krishna Thakur, is a TMC MP and has been re-nominated by the party from Bongaon seat. The BJP has fielded Shantanu, the son of the Matua community matriarch's younger son Manjul Krishna, from the constituency.

Mukherjee said he has not seen religion-based polarisation in West Bengal politics before.

"Atal Bihari Vajpayee and Advani also used to talk about religion, but never in this manner. They never said Muslims will be thrown out of the country," the TMC leader told PTI.

Referring to illegal immigrants in the country, Shah said at a rally in Raiganj last week that after his party returns to power, it will send back every single "infiltrator", except Buddhists, Sikhs and Hindus.

"In West Bengal, no political party indulged in religion-based propaganda. But now, since the main opposition party is doing it, we have to counter it to make people understand their game," said Mukherjee, who is contesting from the Bankura Lok Sabha constituency.

Banerjee, who is also the chief minister of West Bengal, has been spearheading her party's efforts to check the BJP's aggressive campaigning. She has repeatedly underscored her Hindu credentials, while asserting that she stands for peaceful coexistence of people of all religions in the state.

Popularly known as 'Didi' (elder sister), Banerjee, at an election rally on Tuesday, said she was ready to risk her life but would not allow politics of division.

"They (BJP) claim to be the champions of Hinduism; are we not Hindus?" she asked.

Banerjee, who is a Brahmin, said she chants Chandi mantra every morning.

The firebrand TMC chief said her parents had taught her to respect all religions and to treat them equally. "The BJP is imposing on us a religion that has no relation to Hinduism or our country; we believe in togetherness of different faiths and languages," Banerjee said.

Ghosh dismissed the chief minister's accusations that the BJP is trying to create communal tension in West Bengal. "She is saying all this out of the fear of losing the elections," Ghosh told PTI.

"We are only saying that illegal immigrants from Bangladesh will be sent back. Those without valid documents cannot enjoy the rights of the citizens of our country," he said.

Religious minorities from the neighbouring country, who have come to India, will be given shelter as per international convention, he added.

The BJP leader said West Bengal—where Muslims constitute 30 per cent of the total population—had witnessed a number of communal clashes, including those in Raniganj and Dhulagarh.

"Has there been any such communal clash in the other parts of the country?" Ghosh asked.

He alleged that the TMC's appeasement politics has led to creation of communal tension in West Bengal.