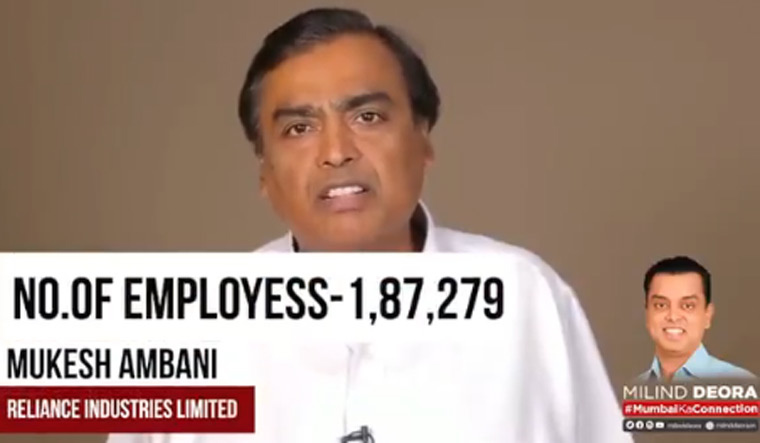 A video uploaded by Congress leader and former Union minister Milind Deora late on Wednesday night has created a buzz on social media as it features an endorsement from Reliance Industries chief Mukesh Ambani. The endorsement from Mukesh is being considered significant as he is the richest man in India and has not been perceived as being given to overt political statements.

Mukesh Ambani and Kotak Mahindra's Uday Kotak are the prominent businessmen featured in the video uploaded by Milind Deora. The video, which also includes small business owners and vendors, is about conditions for business. Deora's Twitter handle declares, “From small shopkeepers to large industrialists—for everyone, South Mumbai means business. We need to bring businesses back to Mumbai and make job creation for our youth a top priority.”

From small shopkeepers to large industrialists - for everyone, South Mumbai means business.

We need to bring businesses back to Mumbai and make job creation for our youth a top priority.#MumbaiKaConnection pic.twitter.com/d4xJnvhyKr

In the video, Mukesh Ambani declares, “Milind is the right man for South Mumbai... having represented South Mumbai for 10 years, I believe Milind has in-depth knowledge of (the) social, economic and cultural ecosystem of the south Mumbai constituency... Both micro-enterprises and large businesses can thrive in Mumbai, so that attractive employment opportunities can be created for our talented young women and men.” The other persons featured in the video also praise Deora, with the small business owners lauding his pro-active approach to their concerns.

The endorsement from Mukesh Ambani for Milind Deora is expected to generate political ripples and create speculation that he supports the Congress. Interestingly, critics are likely to target the Congress over the fact that the party has repeatedly singled out Anil Ambani, Mukesh's brother, as being the illegal beneficiary of the deal for 36 Rafale fighters, announced by the Narendra Modi government.