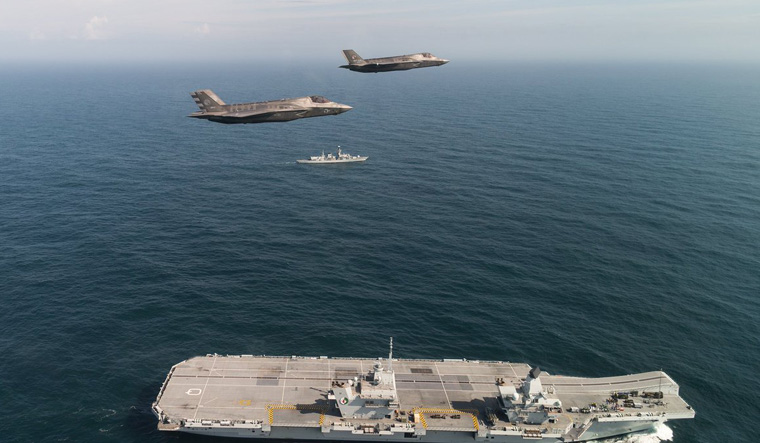 An Australian defence publication reported on Thursday that a major British company is offering its aircraft carrier design for the Indian Navy's future requirements.

Writing in Australian Defence Magazine, journalist Nigel Pittaway quoted a representative of BAE Systems as saying the Queen Elizabeth class aircraft carrier design was being offered to India. The HMS Queen Elizabeth is in service with the UK's Royal Navy and is touted as being the most potent aircraft carrier after the US Navy's nuclear powered carriers.

The disclosure was made on the sidelines of the recent LIMA air show in Malaysia. Australian Defence Magazine reported BAE Systems had already held talks with the Indian Navy.

BAE Systems is offering the Queen Elizabeth design for the Indian Navy's second Indigenous Aircraft Carrier (IAC-2) project, which is envisaged as being larger and more capable than the IAC-1, which is being built in Cochin currently. IAC-1, which is expected to be named the INS Vikrant, will displace over 40,000 tonnes at full load and is slated to begin sea trials by early 2020.

The INS Vikramaditya uses a 'ski jump' to launch its MiG-29K fighters, without the assistance of a powered catapult to impart additional momentum to the aircraft. The HMS Queen Elizabeth uses a ski-jump and is currently undergoing trials with the US-built F-35B short take-off and vertical landing jets.

IAC-2 is projected to be capable of using a catapult, which can launch aircraft at heavier weights than ships using ski jumps. Catapult launch enables an aircraft to carry more weapons and fuel and have a longer range, offering greater performance.

The Queen Elizabeth class is significantly larger than the Vikramaditya and the IAC-1, having a maximum displacement of over 65,000 tonnes and can deploy up to 40 F-35B fighters. BAE Systems told Australian Defence Magazine that “the (Queen Elizabeth) design is adaptable to offer either ski-jump or catapult launch and can be modified to meet Indian Navy and local industry requirements.”

In an interview with THE WEEK in December 2018, Indian Navy chief Admiral Sunil Lanba revealed “Capability assessment for building IAC-2, a CATOBAR carrier of 65,000 tonnes, has been undertaken. India can design and build it. The matter is under deliberation at the ministry for accord of acceptance of necessity (AoN).”

However, there have been few details on concrete timelines for the induction of IAC-2 or other details such as the nature of fighters it carries or the kind of propulsion system it will use. It had been earlier speculated the Indian Navy would consider nuclear propulsion for the IAC-2. The Indian Navy is planning to buy 57 fighter aircraft for its future aircraft carriers.

BAE Systems told Australian Defence Magazine “risks, costs and timetable for the IAC-2 would be significantly reduced by cooperation with the UK”. BAE Systems has had a long-standing relationship with the Indian military, with notable contracts such as the supply of the Hawk advanced jet trainer.

In July 2015, the Indian government had sent requests seeking proposals for the IAC-2 project to four companies: BAE Systems, France's DCNS (since renamed Naval Group), Lockheed Martin in the US and Russia's Rosoboronexport. Naval Group had then presented a derivative of the French Navy's Charles De Gaulle aircraft, but without nuclear propulsion, for the Indian Navy's requirement.

In March, the Royal Navy and Indian Navy formed a 'Carrier Capability Partnership', which aims to share “best practices” from the UK's aircraft carrier programme