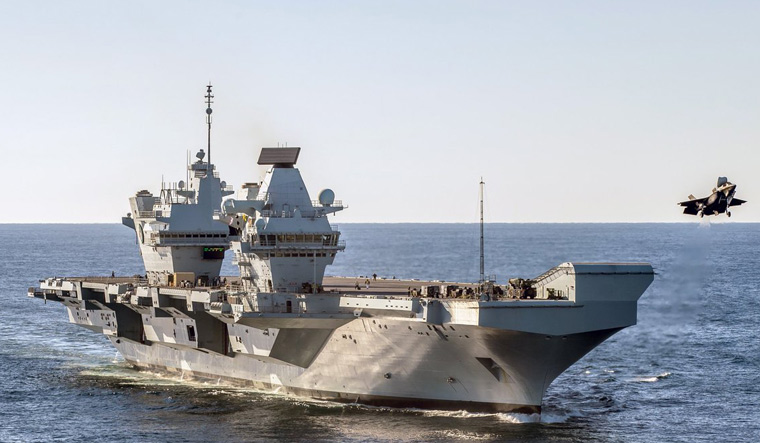 Forces Network reported that the head of the Royal Navy, First Sea Lord Admiral Sir Philip Jones, talked about the issue as he hosted his Indian counterpart, Admiral Sunil Lanba, on board the aircraft carrier HMS Queen Elizabeth in Portsmouth on Thursday.

The UK is developing a new class of frigates called the Type 31, five of which have been ordered at a cost of euro 1.25 billion. The new warships will begin to enter service by 2023.

Referring to the Type 31 frigates, Jones said, "We have not yet decided where we base those ships—there are many decisions to be made. But whether it is actually physically based in India, or whether it is just spending a lot more time working with the Indian Navy, I think there is a rich opportunity there for forward-basing."

Forces Network also reported that Lanba described the Royal Navy's increased focus on the Indian Ocean region as a “welcome step”. Lanba said, “We hope to partner the RN in leveraging our collective strength to ensure safety and security of the region.”

Forces Network added the possibility of the Royal Navy basing a warship in India would depend on the progress of its ongoing forward-basing trials. An in-service frigate, the HMS Monmouth, is currently based in Bahrain.

The proposal for basing Royal Navy ships comes as the UK expands activities in the 'Indo-Pacific' region in the wake of concerns over the rise of China. In August 2018 and January this year, Royal Navy ships passed through waters in the South China sea that Beijing had laid claim to. The HMS Queen Elizabeth is scheduled to travel to the Pacific Ocean, via the Indian Ocean, in 2021.

A key component of the relationship between the Indian Navy and @RoyalNavy is our carrier capability partnership. Today it was a pleasure to host Adm Lanba on board @HMSQNLZ as we discussed areas of mutual interest in the development of our carrier strike capabilities. pic.twitter.com/kGGSoMZeKo

Interestingly, the Royal Navy and the Indian Navy have also formed a 'Carrier Capability Partnership', which aims to share “best practices” from the UK's aircraft carrier programme.

The Royal Navy's website, which reported Lanba's visit to the HMS Queen Elizabeth, quoted Jones as saying, “I am sure we will be able to develop further synergies in our respective future carrier strike capabilities. The important thing is that by developing these capabilities in tandem, we build in a level of interoperability.”

The HMS Queen Elizabeth, which was commissioned in December 2017, will be joined by a sister ship, HMS Prince of Wales, in 2020. Both vessels will carry the advanced US F-35B stealth fighter.

The Indian Navy currently operates the INS Vikramaditya aircraft carrier, purchased from Russia, and will induct an indigenously built carrier by 2020. The Indian Navy uses the Russian-built MiG-29K fighter. Both Indian and Royal Navy carriers use the 'ski-jump' method to launch aircraft over an elevated ramp, instead of using powered catapults.