PM Modi to address rally in Jammu on March 28 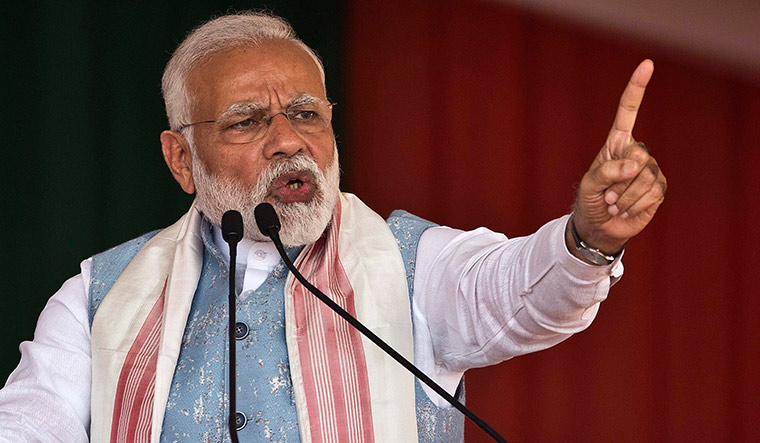 Prime Minister Narendra Modi will kick-start the BJP's election campaign in Jammu and Kashmir on Thursday by addressing a rally in Akhnoor, party leaders said in Jammu on Monday.

In view of the prime minister's visit, security arrangements were reviewed in the state which has been witnessing heightened militant activities in the Kashmir Valley.

The BJP has fielded its sitting MP Jugal Kishore Sharma, who was elected in 2014 with a margin of 2.26 lakh votes, from the Jammu-Poonch Lok Sabha seat, which will go to polls on April 11. The party is likely to face some opposition from rebel BJP candidates like Chaudhary Lal Singh who may contest the polls.

Ahead of the prime minister's visit, the Centre has banned the Jammu and Kashmir Liberation Front under various provisions of the Unlawful Activities (Prevention) Act, holding it responsible for killings of Kashmiri Pandits leading to their exodus from the valley.

This will be the first visit to the state by the prime minister after the February 14 terror strike at Pulwama in which 40 CRPF personnel were killed. This was followed by retaliatory action by the Indian Air Force, whose fighter planes bombed Jaish-e-Mohammed terror camps at Balakot in Pakistan.

Both the countries were on the brink of a war.

The grand start of the BJP's 'Vijayrath' in the region will take place from this rally, Khanna said.

Modi is scheduled to visit Jammu region again in the second week of April for a rally in Kathua. The BJP has given fielded sitting parliamentarian and Minister of State in PMO Jitendra Singh from Udhampur. This seat is going to polls on April 18.