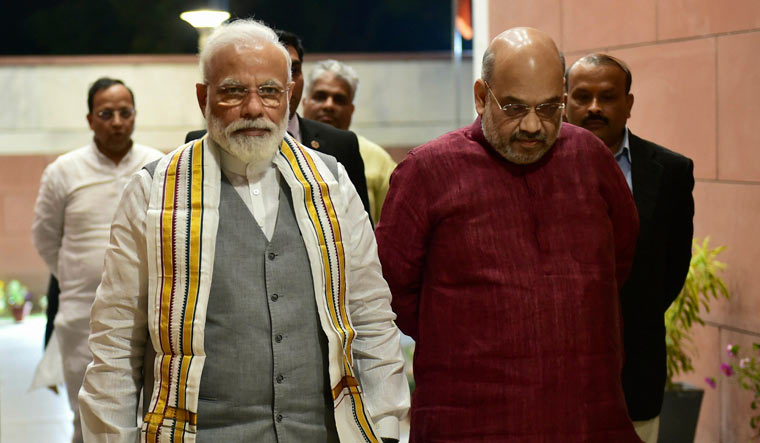 Prime Minister Narendra Modi Friday launched a blistering attack on the opposition for raising questions over the air strikes on the Balakot terror camp in Pakistan, even as he asked state governments to act tough on those who target Kashmiris.

Addressing a public meeting in Kanpur and on Twitter he called those who assaulted two Kashmiri traders in Lucknow "crazed people", using the Hindi term sirphirey log for them.

"It is very important to maintain an atmosphere of unity in the country," Modi said.

He congratulated the Yogi Adityanath government for acting promptly over what some crazed people did to our Kashmiri brothers in the Uttar Pradesh capital.

"I would also like to request other state governments to take the strongest action possible wherever there is an attempt to do something like this," he said.

Two Kashmiri traders were thrashed in Lucknow, the latest in a series of such incidents after terrorists killed 40 Central Reserve Police Force personnel in a car bomb attack in Pulwama last month.

The prime minister lashed at opposition leaders who have sought proof of the damage inflicted on the Jaish-e-Mohammed training camp at Balakot in the Indian Air Force strike in retaliation to the Pulwama attack.

He said a Pakistan Army spokesperson had tweeted about the air strike first, and asked if that country would be moorkh (stupid) enough to admit that it had been struck.

But this is our people asking for proof, he mocked.

The trust of 130-crore people is my proof. Please stop playing games that make Pakistan happy," he said.

Apart from addressing public meetings, the prime minister launched a slew of development projects during his visits Friday to his parliamentary constituency Varanasi, Kanpur and Ghaziabad.

He asked people at the Ghaziabad rally if they would do anything that gets applause from Pakistan.

But some of our opposition leaders have been doing just that for the past 10 days. Identify these people, they are not worried about the country, but are scared of going behind the bars and that is why they want to capture power at the Centre," Modi said.

Modi accused the previous Congress-led government of doing nothing after the 2008 Mumbai terror attack.

"When terrorists killed our 40 soldiers in Pulwama, should Modi also have kept quiet? If I had to behave like the previous governments, why did the people elect me?" he said.

He hit out at the Congress, the Samajwadi Party and the Bahujan Samaj Party, charging that they were not prepared to trust the armed forces.

Modi said these were the same people who questioned the 2016 surgical strike across the Line of Control after the terrorist attack in Uri.

But when full facts on that military operation emerged, they turned speechless", he said.

The prime minister said the remarks by the opposition parties were demeaning the valour shown by the country's armed forces after the Pulwama attack.

Taking a dig at them, he called their proposed opposition mahagathbandhan (grand alliance) a maha-milawat, or grand adulteration.

Such people remember the poor, the farmers, the youth, the Ganga and the industries only when they go out to seek votes, he said.

In Varanasi, Modi claimed that "non-cooperation" by the previous Samajwadi Party government in Uttar Pradesh was responsible for the delay in beginning a beautification project in the holy city.

He laid a foundation stone there for Kashi Vishwanath Temple's approach road.

In Kanpur, the prime minister laid the foundation stone for the Panki thermal power plant.

He flagged off the commercial run on Lucknow Metro's 23-km-long north-south corridor, through video conferencing from Kanpur itself and symbolically laid the foundation stone for the Agra Metro Rail project at the same event.

He laid the foundation stone for a project to build the ambitious Regional Rail Transport System (RRTS) that would connect Delhi and Meerut via Ghaziabad.

"The RRTS is being built at a cost of more than Rs 30,000 crore. Once work on the country's first RRTS is completed, the distance between Delhi and Meerut can be covered in just one hour," Modi told the gathering in Ghaziabad.

He also inaugurated an extension of the Delhi Metro's Red Line and a new terminal building at Hindon airport.