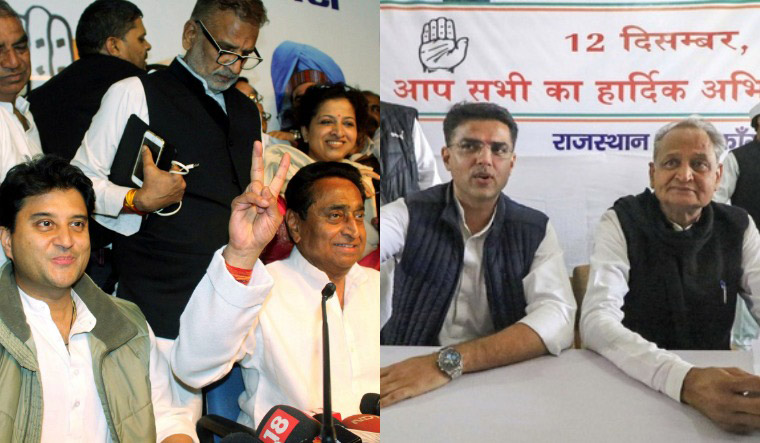 Amid hectic lobbying in the Congress for the top posts in Rajasthan, Madhya Pradesh and Chhattisgarh, party president Rahul Gandhi on Thursday held deliberations with central observers and MLAs at his residence and said the names of the chief ministers would be declared soon.

Gandhi met the party's observers—K.C. Venugopal for Rajasthan and A.K. Antony for Madhya Pradesh—early on Thursday morning along with the state unit in-charges and later met the contenders.

"Yes, you will see a chief minister soon...," Gandhi said when asked about when the decision will be taken. "We are checking, taking inputs from different people in the party, we are taking inputs from MLAs, workers. We are getting a comprehensive answer to what the Congress party and others feel," Gandhi told reporters outside Parliament as the race for the top post in the three states hots up within the party.

The potential chief ministers in Rajasthan and Madhya Pradesh were earlier called in from Jaipur and Bhopal, respectively, for last-minute discussions with Gandhi before a final call is taken on who will be the chief ministers.

The party observers gave their inputs to Gandhi after talking to the newly-elected MLAs in the states. The state legislature parties of Rajasthan, Madhya Pradesh and Chhattisgarh earlier passed a one-line resolution authorising Gandhi, in his capacity as Congress chief, to take the final decision on chief ministers.

The contenders for the top post in Rajasthan—Ashok Gehlot and Sachin Pilot—and in Madhya Pradesh —Kamal Nath and Jyotiraditya Scindia—arrived early morning in the national capital and are slated to hold meetings with Gandhi. Sources said while Nath is the frontrunner in Madhya Pradesh for the post of chief minister, Gehlot leads the race in Rajasthan, while state party chief Pilot is fighting his case and is putting up stiff resistance.

With the young leaders in the party—Jyotiraditya Scindia and Pilot—staking their claim for the top post too, the sources added that the Congress is working on a formula to have deputy chief ministers in two states and discussions on it are under way.

Gandhi had also sought the views of party workers in the three states through an internal messaging platform after he sent out a pre-recorded audio message to them seeking their feedback on their choice of chief ministerial candidate in their respective states.

The sources said that the decision would be taken Thursday itself.

Congress observer for Chhattisgarh Mallikarjun Kharge will also be handing over his report to the Congress president after he met the newly-elected legislators in Chhattisgarh as also the top contenders.

Facing his first test within the Congress, Gandhi started hectic deliberations with senior party leaders since early morning on Thursday.

The sources said Priyanka Gandhi was also present at Rahul Gandhi's Tughlaq Lane residence before a final call on the chief ministers is taken.