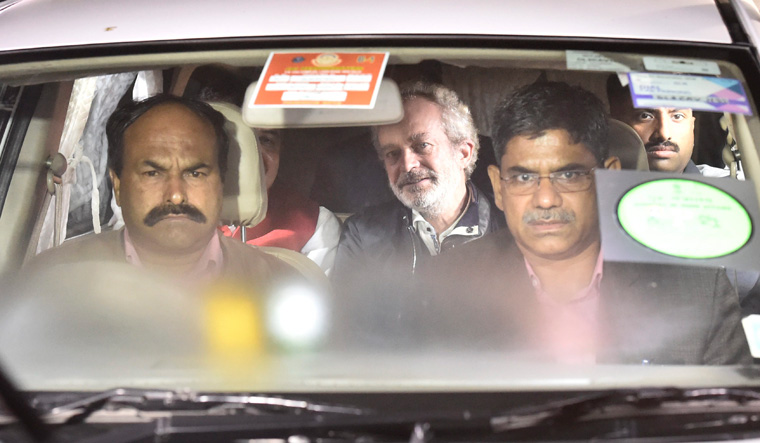 A special CBI court in Delhi on Wednesday sent Christian Michel James, the alleged middleman in the Rs 3,600 crore AgustaWestland helicopter deal, to five-day CBI custody. He will again be produced in the court on December 10.

Michel's advocate asked the court to send him to judicial custody but the CBI sought his 14-days custodial interrogation to confront him with evidence and unearth the money trail in the scam.

The court kept Michel's bail plea pending for next hearing and allowed his counsel one hour in the morning and one hour in the evening for consultancy during his CBI custody. The court asked the CBI to provide all relevant documents including the charge sheet to Michel.

Christian Michel, who is 54, was extradited to India from the UAE on Tuesday night. He was arrested by the CBI shortly after arrival. Christian Michel is one of the three middlemen in the AgustaWestland case, which involved the purchase of 12 helicopters to transport the president, vice-president and prime minister.

The CBI alleged there was an estimated loss of euro 398.21 million (approximately Rs 2,666 crore) to the exchequer in the AgustaWestland deal that was signed on February 8, 2010 for the supply of VVIP choppers worth euro 556.262 million.

The Enforcement Directorate (ED), in its charge-sheet filed against Christian Michel in June 2016, had alleged that he received euro 30 million (about Rs 225 crore) from AgustaWestland. The ED said the money was nothing but 'kickbacks' paid by AgustaWestland to execute the 12 helicopter deal in favour of the firm in 'guise of" genuine transactions for performing multiple work contracts in the country.

Former IAF chief air marshal S.P. Tyagi was also charge-sheeted by the CBI in a Delhi court along with nine others in connection with a bribery case in the AgustaWestland deal.