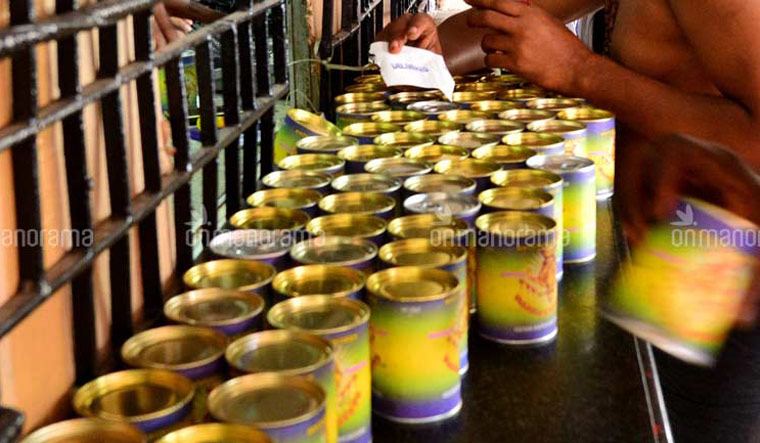 While the faithful are busy blocking the entry of women into Sabarimala, it is feared that the Singapore-based agribusiness giant Wilmar International is stealthily attempting to acquire commercial control over the hill shrine by usurping a name synonymous with its sanctity: Aravana.

Wilmar International has moved to secure the name 'Aravana' as the trademark of its food subsidiary, Kuok Oils & Grains Trading Pte Ltd. The trademark application has been filed in Trademarks Registry, Kolkata.

Aravana is a special type of 'payasam' or kheer prepared in most temples in Kerala. However, it is Sabarimala 'aravana payasam' that is the most popular. The Sabarimala 'aravana', though it uses almost the same ingredients as the other temples, is prepared differently, and therefore has a unique taste.

Sensing trouble, Kshathriya Kshema Sabha has filed a complaint with the Trademarks Registry in Kolkata, which also functions as a tribunal. “We were alerted about the Singapore company's move by our members in Kolkata,” said Atmaja Varma Thampuran, the general secretary of the Sabha.

Travancore Devaswom Board, however, is still in the dark about the attempt to trademark 'aravana'. “No such thing has come to our notice. We can do anything only if we have some information,” Devaswom Board commissioner N. Vasu said.

Atmaja Varma said this was not an issue that could be treated so lightly. “Once the company secures the trademark, who can prevent the Singapore firm from objecting to even Sabarimala temple using the name,” he asked. Rather than taking 'aravana' away from Sabarimala, it looks more like Wilmar wants a share of the 'aravana' commerce.

The sale of 'aravana' and 'appam' during the two-month Sabarimala season alone brings in a revenue of over Rs 100 crore.

It is also not as if the agribusiness giant has woken up to the commercial potential of Sabarimala all of a sudden. They had first applied for a trademark in 2007. The company had by then got a taste of 'aravana'. During certain years in the early 2000s, Kuok had secured the sub-contract to manufacture the small cylindrical containers that hold the 'aravana' payasam. “Then, certain contractors who secured the tender to supply 'aravana' had sub-contracted the container work to Kuok,” Atmaja Varma said.

The then Hindu Aikya Vedi president Kummanam Rajasekharan, who had mounted the fiercest protest against the trademark move in 2007, had also raised the sub-contracting charge. The Devaswom Board had then said it would file a trademark patent application to protect the 'aravana' brand from being stolen by corporate entities. This, however, was not done.

N. Vasu now says that a patent application was not moved because the preparation of 'aravana' is not a commercial activity. “Aravana is not a brand name. It is the blessing, the 'prasadam', given to the devotees. The distribution of this cannot be considered as part of any commercial transaction,” he said.

Atmaja Varma said the 'aravana' trademark issue would be a major point of discussion at the 37th state conference of Kshathriya Kshema Sabha to be held in Kannur on November 11.