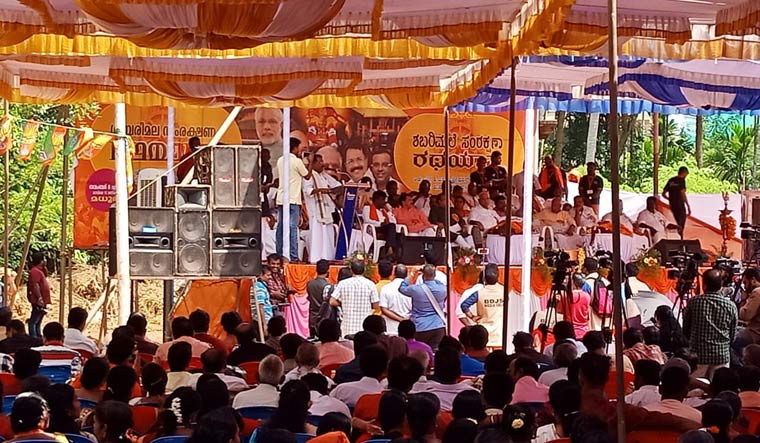 The BJP commences the Sabarimala Rath Yatra from Kasargod

It was symbolism galore at the inauguration of the rath yatra, with a stated intention to protect Sabarimala traditions, organised by the BJP. The procession commenced near Kasargod's Madhur Siddhi Vinayaka temple, which, according to legends, Tipu Sultan tried to conquer and failed. "Pinarayi Vijayan is our modern day Tipu Sultan who is trying to destroy Sabarimala," BJP Kerala General Secretary K. Surendran opened his inaugural address to enthusiastic applause. "It is no hyperbole when I say so. We start our procession from a temple that thwarted Tipu Sultan and we are moving to Sabarimala, which a modern day Tipu Sultan is trying to destroy, " he said.

Pointing out that the first day of Sabarimala Rath Yatra coincided with the 91st birthday of senior BJP leader L.K. Advani, Kerala party President P. S. Sreedharan Pillai said, "With a rath yatra (1990, for the Ayodhya Ram Temple) and then a relatively small party like the BJP, he (Advani) changed the political landscape." Similarly, the Sabarimala Rath Yatra will be a watershed moment for the party, Pillai said.

The rath yatra is significant for Kerala in more ways than one. It, for instance, lays foundation to the BJP's fresh plans to secure political moorings in a state that has consistently rejected muscular Hindutva. This was not an inter-religious or intra-religious conflict, numerous leaders emphasised. According to former Karnataka chief minister B.S. Yeddyurappa, this was a dharmayudha between the believers and the non-believers.

The BJP leaders also criticised efforts to give Sabarimala issue a communal colour. "It is wrong to paint Sabarimala issue in communal terms," said O. Rajagopal, the sole BJP MLA in Kerala. "The Communist party wants to paint it as Hindu versus Muslim or Christian. I would like to tell them that I have met with Hindu spiritual leaders, bishops and Islamic leaders. This is not a solely Hindu/Ayyappa devotee issue, but something that matters to all believers," clarified Pillai.

Pillai had a few more jibes in store for the CPI(M). "A.K. Gopalan (CPI(M) stalwart) tried to destroy Sabarimala. Former chief minister Nayanar filed an affidavit in the high court saying the Sabarimala idol was burnt down and that there was no deity or legal entity as such. Now, they are claiming that they are believers too."

Responding to an audio tape of him talking about Sabarimala issue and how it was a golden opportunity for the BJP,  which evoked outrage, Pillai said he stood by every word of what he said.

As the event was set to commence, with speakers alternating between Malayalam and Kannada for the full benefit of the border district, a few BJP workers were passionate in their espousal of the Sabarimala cause. It is better if the police force left Sabarimala, as they mishandled the situation at the beginning, came a unanimous verdict. "No, the protesters there aren't goons," argued Padman, a native of Madhur. "The temples are governed by certain Sastras," said Gopalan, another activist clad in the signature Save Sabarimala outfit. "You can't suddenly ask the sun to rise in the west and set in the east."