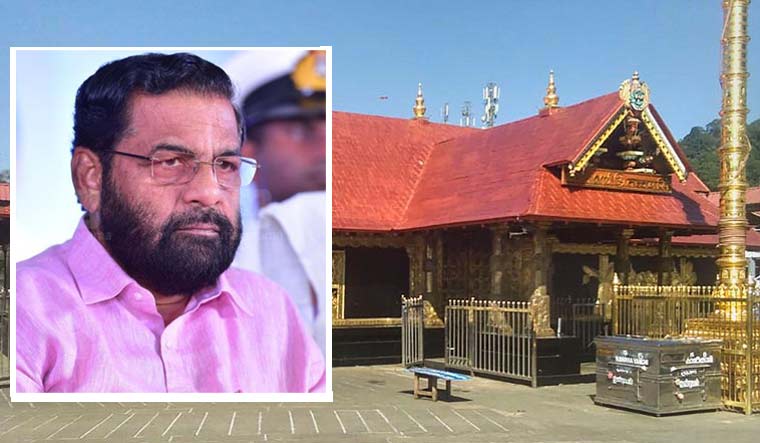 The incidents that took place in Sabarimala in 2018 was something which had pained all of us, says Kadakampally Surendran

In poll-bound Kerala, Devaswom minister Kadakampally Surendran on Thursday virtually expressed regret for the incidents that had rocked the Lord Ayyappa temple at Sabarimala in 2018 over the women entry issue and said it "should never have happened", as the Congress and BJP sought an apology from the left government.

He also vowed that the the final verdict of the Supreme Court would be implemented only after consultations with believers, political parties and the general public.

"The incidents that took place in Sabarimala in 2018 was something which had pained all of us. It should never have happened. It has pained everyone...it has pained me also," Surendran told television channels.

The statement of the senior CPI(M) leader, who is contesting the April 6 Assembly polls, has come at a time when the opposition Congress and BJP are sparing no efforts to rake up the Sabarimala issue to attack the Marxist government.

While senior congress leader Ramesh Chennithala felt the statement was to "deceive" the devotees, BJP State president K Surendran said the minister was shedding crocodile tears and would not be forgiven for the cruelty and injustice shown to Sabarimala, even if he takes a dip in the holy River Ganga a thousand times.

Kerala had witnessed high drama during the nearly three-month long annual pilgrimage season in 2018 with around a dozen women in the 10-50 age group being prevented from entering the Sabarimala temple by protesting devotees after the apex court permitted women of all age groups into the hill shrine.

The LDF, particularly CPI(M), had drawn flak from several quarters over the women's entry issue for its alleged hastiness in implementing the Supreme Court order.

In the Lok Sabha polls in 2019, post-Sabarimala agitation, the LDF had suffered a massive drubbing, losing 19 out of the total of 20 seats.

The CPI(M), however, regained lost ground by winning the recent civic body polls.

The party, which conducted a door-to-door campaign post the LS polls, had admitted that a section of believers had misunderstood the Left on the Sabarimala issue.

Surendran, however, expressed hope that people were no more worried about those incidents now.

"The case is currently before the larger bench of the Supreme Court and whatever be the verdict, the government will implement it only after discussing it with everyone including believers, political parties and general public," the minister said.

He also pointed out that the Pinarayi Vijayan-led LDF government recently had withdrawn all cases that were not of serious criminal nature in connection with the Sabarimala agitation and that was a message.

Hitting out at Vijayan, Chennithala wanted to know if the Chief Minister would publicly admit that the stand taken by him on the issue was wrong and that he was saddened by it.

Vijayan was the one who had said the government had not erred even after the ruling CPI(M) admitted that lapses had occurred in the handling of the Sabarimala issue, he said.

"So, the Chief Minister himself should publicly admit his mistake and apologise to the people," the Congress leader said.

"Can the CM assure that no woman would be allowed to enter the hill shrine violating the customs, in future?" the leader of opposition in the state assembly asked andurged the government to withdrawits affidavit in the top court on the matter.

Rejecting the minister's attempts to reach out to the Hindu community, the BJP state president sought an apology from him for the incidents at Sabarimala.

He also said the minister was now crying out of fear of losing the coming polls and the people of the state would not believe him.