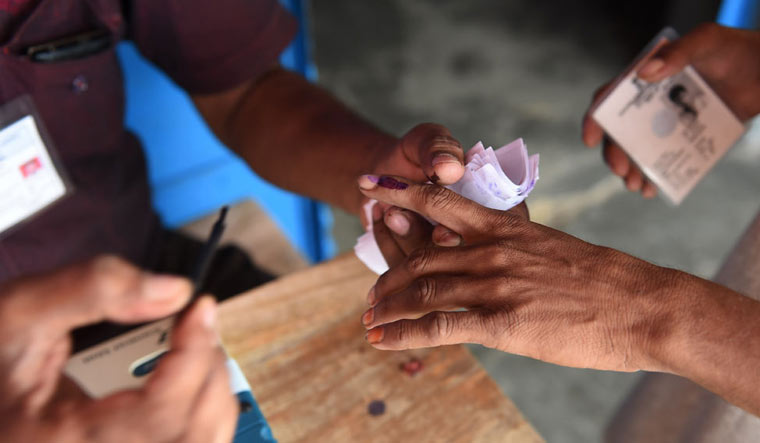 The tussle between Election Commission and civil societies in Mizoram over the demand that S.B. Shashank be removed as the chief electoral officer (CEO) of the state came to a brief halt after Shashank was moved to Delhi on Wednesday. Shashank was called to the national capital for an emergency meeting with the election commissioners.

Shashank had, last week, proposed to the Election Commission that a senior home department official in the state should be removed for making it tougher for the "persecuted" Bru community (known as Reang tribes of the state) to vote in the upcoming assembly polls. This angered the Mizo community members who branded Shashank as pro-Bru and gave the Election Commission a 72-hour deadline to remove Shashank as CEO, failing which, they said they would launch a statewide agitation.

Principal Home Secretary L. Chuaungo, had earlier brought out an order saying the tribal identity card, issued by the Union government, would not be enough for the Bru community members to caste their vote in the assembly polls scheduled to be held on November 28.

Shahshank said, "Chuaungo remaining in the home department would not be in accordance with the norms and regulations framed by the Election Commission of India."

However, an organisation, Coordination Committee, which is backed by the highly influential Mizo Youth Forum, sought the removal of the CEO saying the civil societies in Mizoram are vehemently opposed to the inclusion of Bru community in the state's electoral process.

The Bru community, which has a population of around 52,000 people, has been facing harassment in the state for several decades as the Mizo community members want Mizoram to be a state which is solely composed of Mizos. Having driven out from various parts of the state, the Bru tribals now live in Kanchanpur of Tripura. Following pressure from the previous UPA government in the Centre, Chief Minister Lal Thanhawla took initiatives to bring them back to the state five years ago, but this move had met with stiff resistance.

Despite the opposition from Mizos, a few thousands of Bru people came back to Mamit district of Mizoram, from where they were driven out in the 1970s and 1980s. Five years ago, the Election Commission had gone to Kanchanpur and started enrolling the Bru community members into the electoral roll in order to give them a chance to vote. It was decided that in 2018, polling booths would be opened in Kanchanpur to help them cast vote in the Mizoram assembly election. The civil societies asked the EC not to do that and warned of dire consequences if the Commission fails to heed to their demand.

"How can the fate of Mizoram be decided by people living in Tripura," asked Mizo Youth Forum leader V. Vanlalruata.

The EC, nonetheless, continued with its attempts and began relaxing norms for casting votes in Mizoram polls. The EC recently ordered that the tribal identity cards issued to them by the Union home ministry was enough to cast vote after the state government failed to cooperate with the EC in the distribution of Electors Photo Identity Cards (EPIC). About 12,000 Bru voters are expected to cast their votes in the Mizoram assembly polls this month.

Meanwhile, the chief minister wrote to Prime Minister Narendra Modi, seeking his intervention in the matter.

The Coordination Committee has called off the agitation for a day. They, however, threatened to resume it unless the CEO is removed.