The hill shrine opens for special pooja on November 5 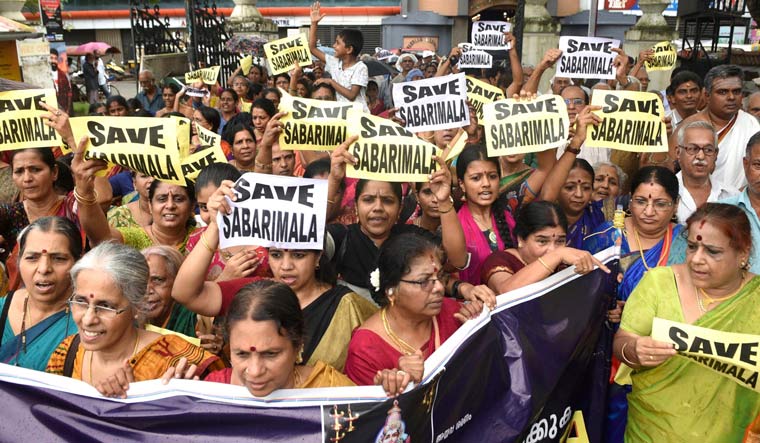 Devotees, mostly women, take part in the 'namajapa' (chanting the name of Lord Ayyappa ) in Ernakulam, Sunday, Oct 09, 2018 against the Supreme Court verdict on the entry of women of all ages into the Sabarimala Lord Ayyappa Temple | PTI

As the Lord Ayyappa temple in Sabarimala is set to open for a special pooja on November 5 and 6, the Bharatiya Janata Party and various Hindu outfits on Thursday decided to step up their protest against the state government's decision to implement the Supreme Court order on women's entry into the hill shrine.

The top court, on September 28, had lifted a centuries-old ban on women aged between 10 and 50 to enter the temple, sparking widespread protests across Kerala. A slew of review petitions were filed against the verdict which the court will hear on November 13.

The BJP-led NDA would hold a rathyatra from Kasaragod to Sabarimala from November 8 to 13 to save "customs and traditions" of the temple. BJP state president Sreedharan Pillai and Bharat Dharma Jana Sena (BDJS) leader Thushar Vellappally will lead the rathyatra.

“Atheists have declared a war against devotees of Lord Ayyappa," said Pillai after the party's leadership meet in Kochi. He said the state government was trying to destroy the temple, "by falsely propagating that it has turned into a centre of conflict post the verdict”.

The BJP also accused the ruling CPI(M) of trying to persuade its women cadres to visit the shrine to break its customs. The temple's three-month long annual pilgrimage season will commence on November 15.

The Sabarimala Karma Samiti, which includes representatives from various Hindu outfits, held a meeting on Thursday at Kottayam, in which a member of the Pandalam royal family was also present. The meeting, inaugurated by Swami Chidananda Puri of Kolathur Advaita Ashram, decided to organise namajapa ghosham (chanting of Ayyappa mantra) in all temples when the Sabarimala shrine opens for special pooja on Monday.

Meanwhile, the Kerala High Court refused to entertain a plea seeking to maintain status quo on the issue of entry of women of menstrual age group into Sabarimala. A division bench of Justices P.R. Ramachandra Menon and Devan Ramachandran observed the petitioner can approach the Supreme Court if any clarification is required on the matter.

Kerala has been witnessing widespread protests and rallies ever since a Constitution bench of the apex court allowed women of all ages to enter the shrine. Over a dozen women in the 10-50 age group were forced to return by protesting devotees when the temple opened for monthly poojas between October 17 and 22.