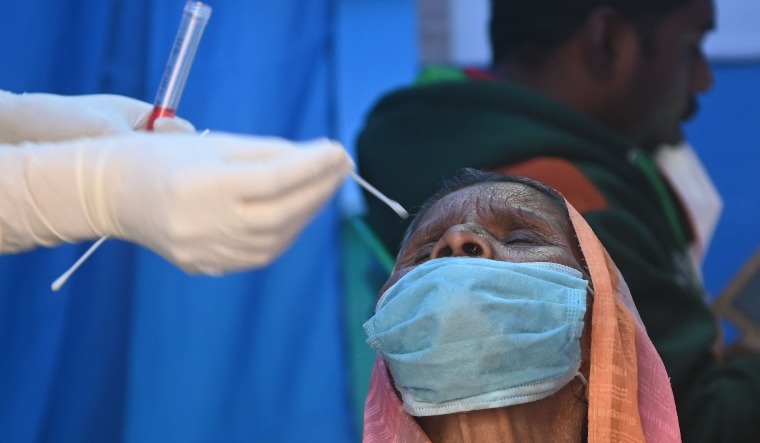 A woman being tested for Covid-19 in Kolkata | Salil Bera

A new subvariant of Omicron could trigger a fresh wave of Covid-19 infections in some countries, World Health Organisation (WHO) chief scientist Dr Soumya Swaminathan has said.

There are over 300 subvariants of Omicron, but what is of concern right now is the XBB, which is a recombinant virus, she said. “We had seen some recombinant viruses earlier. It is very immune-evasive, which means it can overcome the antibodies. So slightly that we may see another wave of infections in some countries because of XBB," she told reporters on the sidelines of the annual general meeting of the Developing Countries Vaccine Manufacturers Network (DCVMN) in Pune.

The WHO is also tracking derivatives of variants BA.5 and BA.1, which are also more transmissible and immune-evasive. She, however, clarified that so far there is no data from any country to suggest these subvariants are more clinically severe.

She further said: "We need to continue to monitor and track. We have seen that testing has gone down across countries, the genomic surveillance has also gone down over the last few months. We need to maintain at least a strategic sampling of genomic surveillance so that we can keep tracking the variants as we have been doing and studying," she said.

She further stated that the Director General of the WHO has said that Covid-19 continues to be a public health emergency of international concern.

"The full vaccination schedule is actually three doses. The primary two doses plus booster in the next four to six months. But in many countries, including India, the uptake of the booster is low. So we really encourage people to take the third dose," she said.

Speaking on the sidelines of the same event, Chief Executive Officer of Serum Institute of India (SII) Adar Poonawalla said there is no demand for Covid-19 booster vaccines as people are fed up with the pandemic.

Poonawalla added that SII stopped the production of the Covishield vaccine since December 2021. Around 100 million doses also got expired, he said.

Going forward, when people take a few shots every year, they may take anti-coronavirus vaccines and other shots together, Poonawalla said, adding, "It will become that kind of a product."