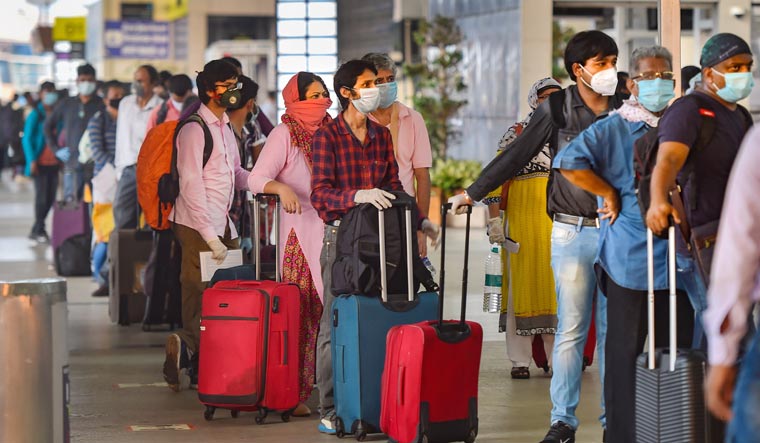 Passengers stand in a queue as they arrive at Chennai airport for domestic travel. May 25, 2020 | PTI

The novel cornonavirus has a higher rate of transmission among close contacts and thus, public health measures such as physical distancing, personal hygiene and infection control are necessary to prevent its spread, the Indian Council of Medical Research (ICMR) has reconfirmed.

Sharing the findings of the first cluster of SARS-CoV-2 infection among Italian tourists in a study, the ICMR also said testing of close contacts identified infection in presymptomatic and asymptomatic cases, and stressed that the strategy to trace and test close contacts is crucial for early identification and isolation of positive patients to prevent community transmission.

A detailed investigation of the cluster of SARS-CoV-2 infection among 16 Italian tourists and an Indian was conducted in March-April, an ICMR study published online in the Indian Journal of Medical Research (IJMR) said.

A group of 23 Italian tourists reached New Delhi on February 21 and along with three Indians, visited several tourist places in Rajasthan.

One of the members from the group, a 69-year-old Italian male (index case), was hospitalised at the Sawai Man Singh (SMS) Medical College in Jaipur, with symptoms of fever, cough and difficulty in breathing on February 29, and tested positive for the infection.

His 70-year-old wife, who did not have any symptoms, also tested positive for Covid-19 and was isolated, along with him.

The remaining 24 members of the group (21 Italians, three Indians) returned to Delhi on March 2 travelling in the same train compartment and were quarantined.

All them were initially asymptomatic. Their throat and nasal swabs were collected on March 3 and 15 of them (14 Italians and an Indian) tested positive and were isolated.

Of these 17 patients, nine were symptomatic, while eight did not show any symptoms. Of the nine who developed symptoms, six had a mild fever, one was severely and two were critically ill.

"The median duration between the day of confirmation for Covid-19 and RT-PCR negativity was 18 days (range: 12-23 days). Two patients died with a case fatality of 11.8 per cent.

"Our study cluster showed a higher attack rate than that reported in existing literature such as in Diamond Princess Cruise ship (19.2 pc) and Grand Princess Cruise ship (16.6 pc)," which the ICMR said was may be due to the closed environment, high and persistent exposure to the index case during their travel (average of six hours daily for eight days).

Except for the index case, all other cases were asymptomatic at the time of testing and nearly half of the positive cases remained asymptomatic throughout the illness, the study highlighted.

Proactive Covid-19 testing of close contacts led to the identification and isolation of the asymptomatic and pre-symptomatic cases, thus preventing further transmission. Older patients with chronic comorbidities progressed to severe or critical illness, as reported in other studies.

The proportion of symptomatic patients progressing to severe or critical illness in the cluster was high (3/9, 33.3 pc). The case fatality ratio (CFR) in the affected cluster was 11.5 per cent.

"The possible reasons for the CFR being on the higher side could be the higher median age group of the patients and presence of comorbidities," the study said.