Of every 1,000 kids born in Madhya Pradesh, 47 do not survive till their 1st birthday 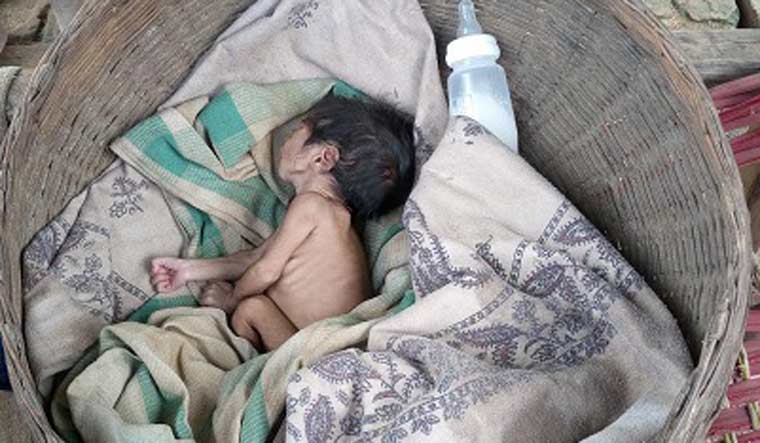 Madhya Pradesh continues to be the most unsafe state in India to be born in, as it reported the highest infant mortality rate (IMR) in the country again, according to data from the Sample Registration System (SRS) of 2017, released on Friday.

With infant deaths at 47 per 1,000 live births, Madhya Pradesh has reported the highest IMR in India for the 15th consecutive year, according to SRS data. This means that of every 1,000 children born in Madhya Pradesh, 47 do not survive to celebrate their first birthday. 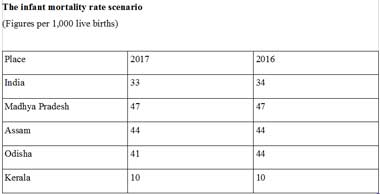 IMR is considered one of the most important health indicators for a state, and high IMR reflects gaps in the healthcare and nutrition services system causing deaths of the most vulnerable section of a state’s populace—the infants.

The SRS data is released by the office of the Census and Registrar General of India. The overall IMR for India for 2017 is 33 per 1,000 live births, just a point lower than 34 recorded in 2016.

The second-highest IMR in the country for 2017 has been reported in Assam at 44, while the third highest is in Odisha at 41. The state with lowest IMR continues to be Kerala, with IMR at 10 per 1,000 live births. While Assam and Kerala have also reported stagnating IMR (same as in 2016), Odisha has commendably shown an improvement of three points, coming down from 44 in 2016.

Assam had IMR equal to Madhya Pradesh (worst in the country) in 2013 at 54/1,000 live births. But the northeastern state managed to reduce it by 10 points since, while Madhya Pradesh has gone down only seven points.

One interesting and surprising trend noticed since the 2015 SRS data is that the IMR of boys is higher compared with girls. This trend continued in 2017, too. For 2017, the male IMR was reported to be 48 per 1,000 live births compared with 45 for female infants, but the female IMR has gone up a point since 2016.

Experts have attributed this to the improvement in short-term measures, especially ante-natal care where gender discrimination is not as much possible.

Nutrition expert Sachin Jain said that though the IMR has come down significantly in Madhya Pradesh over the last decade, the fact that the rate of dip has stagnated and the state still continues to record highest infant mortality could be attributed to a focus on short-term measures.

“Low-hanging fruits are easier to pick. Reducing IMR in the short term through better ante-natal care, including immunisation, has been achieved, but the state is not putting enough focus on long-term issues like livelihood insecurity, environment insecurity and climate change. For example, underprivileged communities are known to migrate for work with newborn babies, leading to deprivation from health facilities and a safe environment that can highly increase both morbidity and mortality,” Jain said.

Madhya Pradesh Health Commissioner Nitesh Vyas, however, attributed the stagnant IMR to the increase in reporting of infant deaths due to more registrations at facilities like Special Neonatal Care Units (SNCUs) and others. He, however, said that Madhya Pradesh is well focused on the issue and is setting up paediatric intensive care units (PICUs) at all districts.

“Also, our Dastak campaign to identify and treat babies with health issues at the doorstep will be conducted again from June 10 to July 28. Here the ANMs, ASHA workers and Anganwadi workers would together to conduct home-to-home visits, review infant and child health and make immediate interventions as required,” Vyas said.