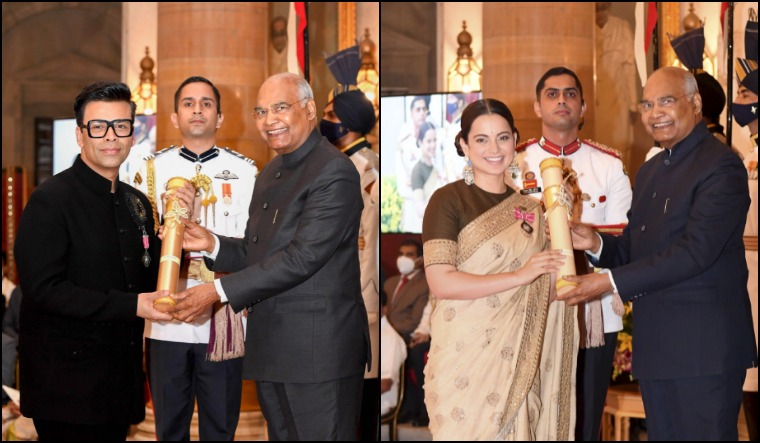 Bollywood stars who received their Padma Shri on Monday for their contribution in arts expressed their happiness and gratitude on social media. Karan Johar, Ekta Kapoor, Adnan Sami Khan and Kangana Ranaut were among the 102 people who were honoured with the prestigious award at Rashtrapati Bhavan.

Director and producer Karan Johar penned an emotional note, calling it a “truly memorable moment”. “I knew I would have made my father so proud and was so happy to have my mom there by my side,” he wrote.

In another post, he shared a video of him receiving the award and said: “Today felt surreal! I am honoured and humbled that the prestigious Padma Shri Award was bestowed on me.... This is a monumental day for me, my mother, my kids and my company, and will forever be etched in my memory.”

Television producer Ekta Kapoor thanked her followers and dedicated the award to her family. Posting her video she wrote, “It is an absolute honour to receive the Fourth Highest Civilian Award for my humble contribution in the field of performing arts.... I want to thank my family, friends, my team at Balaji Telefilms and most importantly the audience, for believing in me and supporting me. I hope to always push the envelope, challenge norms, give talents a platform that they truly deserve, instil pride and give back to the country that has fuelled my ambition and dreams. JAI HIND.”

Kangana Ranaut used the opportunity to slam her haters. She shared a video where she recalled her journey and thanked the Indian government for acknowledging her with the award.

“I have received a lot of love and respect many times, but today, for the first time, as an ideal citizen, I have received an award from the country, I am grateful for that. When I started my career, I did not succeed for many years. But when I succeeded after 8-10 years, I started working in many different ways rather than enjoying success.

“I boycotted many things like fairness creams, item numbers and big production films. I even made enemies more than money. I raised my voice against what is happening against the country, whether it is Jihadists, Khalistanis or other countries that spoke against our country. I already have cases against me. This honour will silence many people. I have great respect for this country. Jai Hind.”

“I am forever indebted to my beautiful people of India who have loved me unconditionally and been an integral part of my journey which has brought me here.”