Survival Stories: Here is how these filmmakers made an anthology amid lockdown 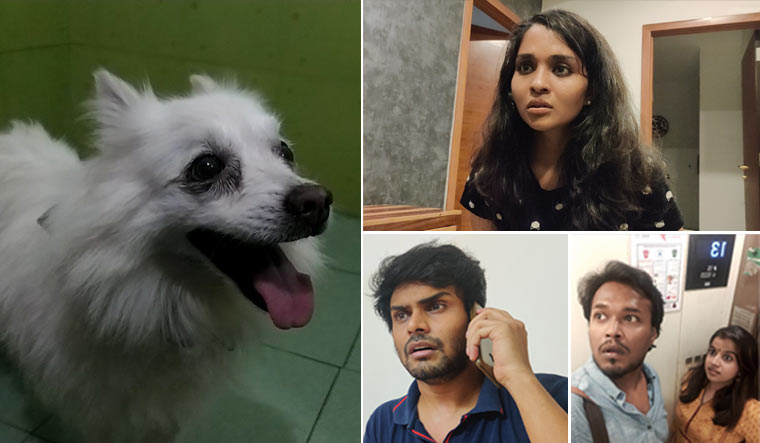 Screenshots from some of the chapters in Survival Stories

In his essay 'On Adventure Films', author and film critic Thomas Sobchack compares survival films to romance. "They both emphasise the heroic triumph over obstacles," he notes.

Survival films are a study in how to make the best out of a situation with limited resources at hand. Such films generally have very few characters, with just their wits and few tools at their disposal, and only one objective in mind—to escape the dangerous situation they are in.

Now, as the whole world is facing a lockdown and fighting for its survival, Rahul Riji Nair, an award-winning young filmmaker from Kerala, has brought forth an anthology of survival stories. And, just as the film genre he chose, his project also got its completion like a survival story—with limited resources available, and facing lot of obstacles.

"I believe that there is no bad time to make art," he says. His inspiration was a Greek film festival that brought out an anthology of 10 stories from 10 different directors during the lockdown. "Their subject was different. But I thought, why don't we also try something of that sort," says Rahul.

He shared his idea with his filmmaker friends. But many were not in a position to conceive their individual projects. "That's when I thought to concentrate on my actor-friends," says Rahul. "I gave them plots to work, and asked them to shoot in their home premises. They took help of their relatives and friends and shot the footage." Rahul and his core team analysed the clips remotely and suggested the changes and corrections required.

"We guided them with the kind of shots and angles required. Some of the footage was not satisfactory, so we had to reshoot," says Rahul. "Though each chapter in the film is just 5 minutes, shooting of each individual work took around 10-20 hours. Also, there were technological challenges; while uploading some of the files got corrupted; some of our associates faced issue in uploading the files because of staggered internet access."

There are 8 different stories in the anthology. Jeo Baby and Jayakrishnan Vijayan directed the chapters ‘Toys from Heaven’ and ‘Waiting for You’ respectively. The remaining chapters were all conceived by Rahul. Award winning editor Appu N. Bhattathiri did the editing and Siddharth Pradeep did the music for the anthology.

The film had its release on May 8 via YouTube. "It took exactly two weeks to complete this effort," says Rahul. "Only when we were checking the credit titles we came to know that almost 40 people had been associated with it. More than bringing out a technically perfect film, it was about delivering the spirit of cinema in this difficult period."

Rahul says that it was a conscious decision to make ‘survival’ the subject. "We need to tell stories of hope in this period," he says. "In this anthology, the lockdown is a background only in two films. This is more about the universal and ever-green theme of survival against the odds."

For instance, in the short ‘Hook or Crook’, starring Vinitha Koshy and Renjith Shekhar Nair, the protagonist is a lady who is facing a burglar at her home. Whereas, in the chapter 'Revolution and Death', we find the protagonists are two revolutionaries who are facing a villainous state which is chasing them like hounds.

'Waiting for You' is an interesting survival story of a dog (Titti) that is locked up in an empty house during the lockdown. ‘Jeo Baby's Toys from Heaven’ tells the story of a crippled mother and her child from a difficult situation. Though, varying in degrees as far as the act of survival is concerned, all the shorts are verdicts of the fighting spirit and survival instincts at the face of peril.

Rahul adds that the film is a tribute to his film fraternity, too. "The film industry is going through a very difficult situation and uncertainty. We don't know what the future look like—whether more films will now opt for OTT release, or whether we will be able to go back to the days of theatrical release. But we need to survive and this is the message we need to tell our friends in the industry."