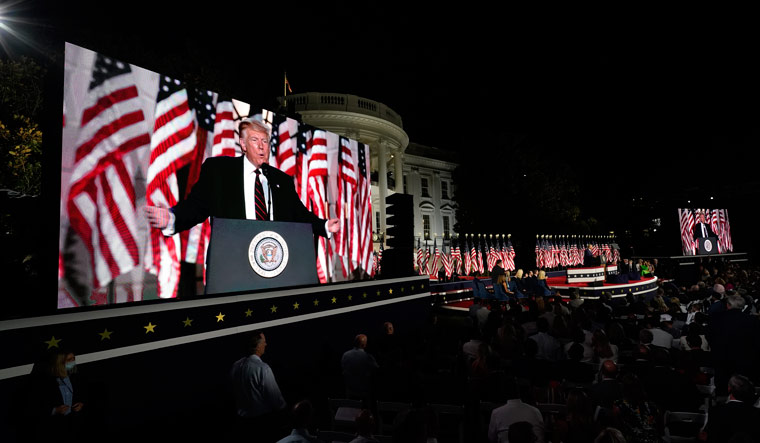 Top Republican leaders have hailed President Donald Trump's record in handling the economy, restoring the law and order and confronting China head-on to urge Americans to re-elect him in the November presidential elections.

Republicans are proud to stand with him and work for you. Together we built the greatest economy the world has ever seen and we'll do it again. We confronted China head-on Tore up bad trade deals and made better ones, McCarthy said.

McCarthy said that the Trump Administration has taken out the world's top terrorists.

Achieved energy independence. Defended the sanctity of life. And restored law and order at the border, he said.

Daniel Scavino, currently serving as the White House Deputy Chief of Staff for Communications and Director of Social Media, said that the president cannot be beaten.

He's got a fighting spirit -- like so many of you do -- and winning for America is what he does. They call it chaos, President Trump calls it change, he said.

Just think about what we achieved together with President Trump. The strongest economy in history. The lowest unemployment rate for almost all demographic groups -- Black Americans, Hispanic Americans, women, and so many more, Scavino said.

Debbie Flood, president of architectural hardware and castings manufacturer Melron Corp, said that under the Trump administration businesses have enjoyed a thriving economy stimulated by Trump's pro-business and pro-worker policies.

Senator Tom Cotton from Arkansas said that the Democratic presidential candidate Biden coddled socialist dictators in Cuba and Venezuela, while President Trump fights against communismin America's backyard and around the world.

And on the Communist Party of China, there is no comparison. Joe Biden aided and abetted China's rise for fifty years with terrible trade deals that closed our factories and laid off our workers. President Trump stands up to China's cheating and stealing, and lying, he alleged.

But China's not giving upin fact, they're rooting for Joe Biden. America's other enemies won't give up either. But Joe Biden would be as wrong and weak over the next four years as he has been for the last fifty, Cotton said.

Speaking on behalf of 50,000 active and retired New York City police officers, Police Benevolent Association President Pat Lynch, if Americans are going to turn the tide and restore law and order, they cannot fall into the left's trap.

Wherever Democrats are in power, the radical left is getting exactly what they want. And our country is suffering for it, he said.

I have been a New York City police officer for 36 years. I've never seen our streets go this bad so quickly. I've never heard from so many cops, from every corner of the country, who are saying the same thing: Our hands are tied. Something has to change, Lynch said.

If we are going to turn the tide and restore law and order, we cannot fall into the left's trap. There is nobody who hates bad cops more than good cops, but that doesn't matter to the radical left. To them, we're all bad, because we are all blue, he said.