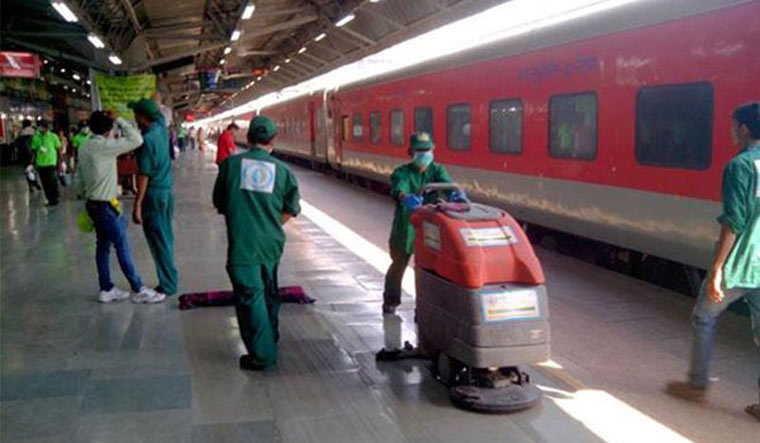 The Railways has cancelled 85 trains as precaution against the spread of coronavirus and due to low occupancy, officials said. It has also issued a set of guidelines to zonal railways for its catering staff stating no employee having fever, cough, runny nose or difficulty in breathing "should be deployed in the business of food handling on Indian Railways".

As a precautionary measure railway zones like WR and CR have also increased the prices of their platform tickets to discourage large crowds.

"All staff of catering units should be directed to maintain personal hygiene as per the food safety norms/standards of FSSAI," the guidelines stated.

"All staff to wear a facemask and hand gloves, head gear etc while dealing with food production and services to passengers, staff be advised to wash their hands with soap frequently, avoid contact with people having cough or cold, avoid touching eyes, nose and mouth, hand gloves to be changed frequently and disposed off in closed dustbin," they added.

It also said that all supervisors deployed in catering establishments be directed to maintain personal hygiene and impart counselling to their subordinates in this regard.

"All staff deployed in food production and services should wash their uniforms on daily basis and wear clean uniforms on duty, it said.

The order stated that proper packaging of food items must be ensured and usage of loose items should be avoided as far as possible.

"Strict prohibition of entry of outsiders/unauthorised people in food dealing area should be ensured. All staff to pay proper attention to advisories/guidelines issued by ministry of health, FSSAI and local health departments of central and state governments from time to time and ensure compliance thereof," the guidelines said.