Will coronavirus lead to a global recession and should India be worried?

Global economy has dismal prospects, but there are opportunities amid slowdown 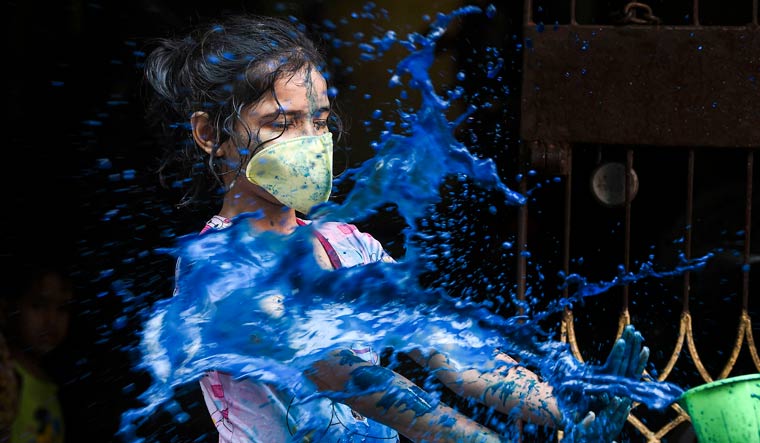 A child wearing protective masks as a precautionary measure amid the coronavirus scare is seen smeared in dry colours during Holi festival celebrations, in Chennai | PTI

The coronavirus scare has an unexpected sting in its tail—a fishtailing of the world's economy that could end up in a much-dreaded recession.

And if you thought India was already in the choke-hold of a recession, you are wrong. An economy is considered to be in recession if it has two quarters of decline, that is, growth contracting below zero per cent. India, so far, has only been in a 'slowdown' mode, its high growth rate for many years that averaged around 7-8 per cent 'slowing' down to 4 per cent. But, will the country be able to save itself from the new scourge of the virus’s aftermath?

With the global economy already on the back foot due to all-round sluggishness, the US-China trade wars and more since last year, the coronavirus pandemic now has ensured that it is set for a tumble this year. The United Nations Conference on Trade and Development (UNCTAD) says global growth, which was already low at 2.9 per cent last year, could fall below 2 per cent this year. Moody's, the rating agency, revised its global GDP projection to just 2.1 per cent, while Rabobank, a Dutch multinational banking and financial company, put it even lower at 1.6 per cent. If you go by the Washington-headquartered body of banks, the Institute for International Finance (IIF), it could be even less at just one per cent.

“A global recession is now all but certain,” Rabobank declared on Tuesday.

With the virus causing a domino-effect on the global supply chain of factories, with trade routes getting suspended and business activities across economic hubs around the world slowing down, recession is now a serious worry. All continents except Antarctica have reported cases of Covid-19 over the past two months. It is now clear that the shock will...dampen domestic demand globally, which will affect a wide range of non-traded activities across countries and regions simultaneously, Moody's said in a note. Experts indicate that recession could be a reality for many countries soon, especially for those seeing suspension of business activities.

India's stock markets have seen severe volatility in the past few days—the Sensex lost 5 per cent of its value just on the day before Holi, the biggest single-day fall since the 2008 financial crisis, the last time the world bore the brunt of a recession. Monday's carnage at the bourses, which took its cues from the crash in crude oil prices to a 30-year-low, swept away 6.4 lakh crore rupees of investor money. The UNCTAD assumes India will have a trade loss of 348 million dollars due to the corona outbreak, but this was before the fresh spate of cases spiralled to a new high, presently standing at 60 as of Wednesday afternoon.

However, there are many who see the silver lining in the cloud. ICICI Securities say the present volatile market scenario is “an opportunity to buy equities.” Adds Rumki Majumdar, an economist with Deloitte India, “India's exposure to the global economy is low because of the country's limited presence in the global supply chain.”

In fact, many experts have pointed out that the crash in oil price will only help India's economy, as 80 per cent of the nation's petroleum requirements are imported. It could actively even help in bringing down the fiscal deficit, in a best-case scenario.

While many are hopeful that even if a recession hits major economies that are part of the global supply chain, it would likely be short-lived. However, with cases of infections rising by the hour and the economy world over getting the hard end of the stick, India should do well to be cautious.

“If the outbreak is protracted beyond March, it will start hurting [India's] domestic industries,” warns Majumdar. “The Indian banking sector may come under further pressure if it has exposure to industries with high dependence on China. Falling stock market prices will add to the financial sector's woes.” Supply shortages because of production cuts are likely to push up inflation, too.

As economist Neil Shearing pointed out earlier this week, “There's a good chance that the 'worst case scenario' quickly becomes the most likely scenario.”