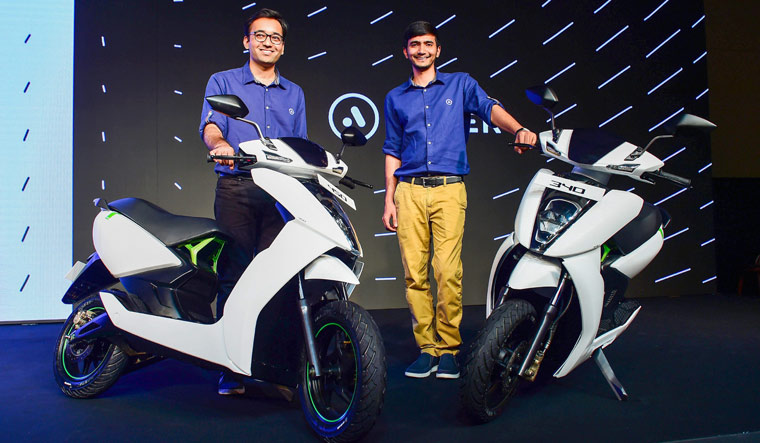 After establishing presence in Bengaluru and Chennai, electric two-wheeler startup Ather Energy is ready to scale up to more cities.

The company entered the electric two-wheeler market launching the Ather 450, with deliveries starting September 2018. The company has been selling the scooter in Bengaluru and Chennai. After getting a good response, it's set to drive in to 10 more cities, including, Mumbai, Delhi, Pune and Hyderabad in 2020-21. It is also looking to further expand to 24 cities in the next year, said Tarun Mehta, co-founder and chief executive of Ather Energy.

Mehta refused to disclose the number of scooters it has sold thus far, but the plan is to sell 30,000 scooters by the end of March 2021, given the planned expansion. "We already have a capacity to manufacture 30,000 units and we are adding incremental 1 lakh capacity we have taken up in Tamil Nadu," he told THE WEEK.

The company has so far raised Rs 675 crore through various rounds of funding. India's largest two-wheeler company Hero MotoCorp, is among its largest investor, after it raised its stake to 35.10 per cent in 2019. Flipkart co-founder Sachin Bansal and private equity fund Tiger Global are also among its investors.

Ather recently launched the 450X scooter, a successor to the 450, its first e-scooter. The 450X can be brought for a full payment of Rs 1.49 lakh ex-showroom for the Plus variant and Rs 1.59 lakh for the Pro model.

If you don't want to make a huge investment upfront, there is also an option to pay Rs 99,000 (doesn't include battery cost) for the scooter and then sign up for a subscription plan starting Rs 1,699 per month, that will cover battery cost, public charging and future software updates among other things.

Ather 450X deliveries will begin in July. In Bengaluru and Chennai, the company has its own experience centres through which it sells the scooters. It is scouting for dealer partners in the new cities where it will drive into this year.

Ather will look to raise more funds this year, said Mehta, but the funding requirement could come down from 2021-22 as cashflows increase.

"This pricing (of 450X) gives us a shot of being profitable at the gross margin level by later this year. If we achieve that, then our cashflow needs to come down, but that's next year. This year we will raise capital," said Mehta.

Ather will continue to focus on the premium e-scooter segment for the next few years, but it does plan to launch a more mass-market product at some point. "We will build a mass market product and we have toyed around with the idea for a few months. Building a mass market product needs a lot of supply chain improvement that needs massive scale first. So, we need to first capture people at the premium segment first because we have something that works for them," said Mehta.