Low GDP rate of 5 per cent is a wake-up call for the Indian economy: Experts

Some experts feel the slowdown has bottomed-out, others call for urgent reforms 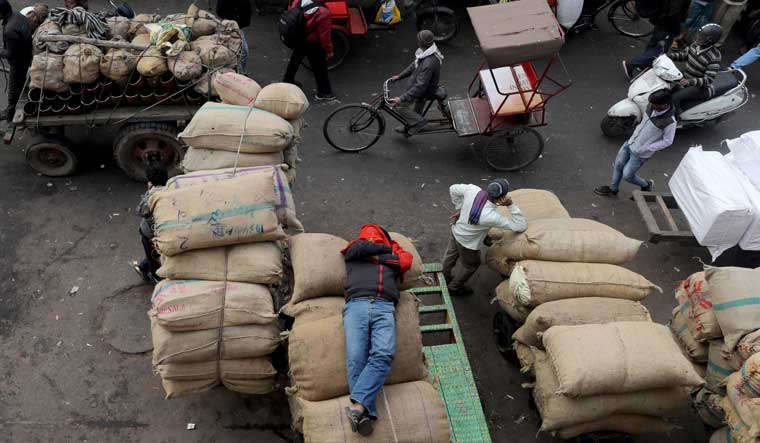 A labourer sleeps on sacks as traffic moves past him in a wholesale market in the old quarters of Delhi, India, January 7, 2020 | Reuters

Advanced estimates released by the government show India's GDP growth rate for 2019-20 at 5 per cent, a dip from the 6.8 per cent that was there in FY19.

With this, India is projected to clock the slowest growth rate since the global financial crisis in FY09. Experts speaking to THE WEEK feel that the slowdown has deepened and will likely extend longer than anticipated.

Dr. Arun Singh, Lead Economist at Dun and Bradstreet India, says that the combination of weak balance sheets, stagnant consumption and rising inflation will prove difficult for the government to tackle.

“What is worrisome is that the four balance sheets i.e. of the households, corporates, banks and the government remain weak. Further, boosting consumption when incomes are not growing, and inflation is on the rise, will be difficult for the government. Reinforcing confidence within stakeholders in the ecosystem will be one of the biggest challenges as optimism levels of both businesses and consumers have deteriorated strongly. The sharp deceleration in growth has led to rising concerns that India might miss the goal of achieving the target of becoming a $5 trillion economy by 2025,” he said.

He added that the upcoming union budget is awaited “to understand how the government will outlay its standpoint to revive the economy”.

Brand experts such as Harish Bijoor says that while the low GDP numbers are a dampener for sure, the slowdown may have reached its limit.

“The biggest worry is the manufacturing sector numbers. That is the real solid engine of growth. That has sunk. The big challenge is consumption. We seem to have taken the cautious route of postponing purchases. Till consumption is back, the mood will remain bleak in the economy. However, the good news is that we seem to have touched the bottom. If the global headwinds remain stable, we can't sink any more, I guess. Therefore, [it is] good to stay positive and enjoy the ride ahead—hopefully, an upward one,” he said.

Alok Shende of Ascentius Consulting Mumbai expressed concern that policy-driven shocks have added to the slowdown.

“The underlying driver for the slowing rate of GDP growth is led by a decrease in investment rate and lacklustre consumer spendings. Furthermore, policy-driven economic shocks have tended to accentuate the drivers of economic slowdown,” remarked Shende.

"Socio-political agenda has put the economy to the backseat in the last several quarters. However, once the Government appreciates the structural inhibitions, I am hopeful that reforms affecting market structures and ease of doing business will be rolled out. The economy needs to look beyond government spending. We urgently need measures which can affect demand side, particularly rural demand, and boost productivity. This will also help in augmenting the investor confidence," he said.

A Brickwork Ratings report released today suggests nascent signs of an economic revival. The report says that the domestic economy may see a moderate improvement in GDP in the next fiscal, supported by government measures. Muted manufacturing activity hit by a slowdown in the automobile sector led the slowdown in the GDP to hit 4.55 per cent in Q2 2019-20, the lowest in the last 26 quarters. There are nascent signs of recovery through some economic indicators, like the moderate rise in passenger air traffic, improved manufacturing activity and sales of passenger cars. The December manufacturing PMI bought a huge respite to the otherwise gloomy industrial activity, the report said.

The report added that the declining investment, stagnant exports, and rising unemployment is a wake-up call for the government to fast track the reform process and provide a substantial stimulus for reviving growth momentum.