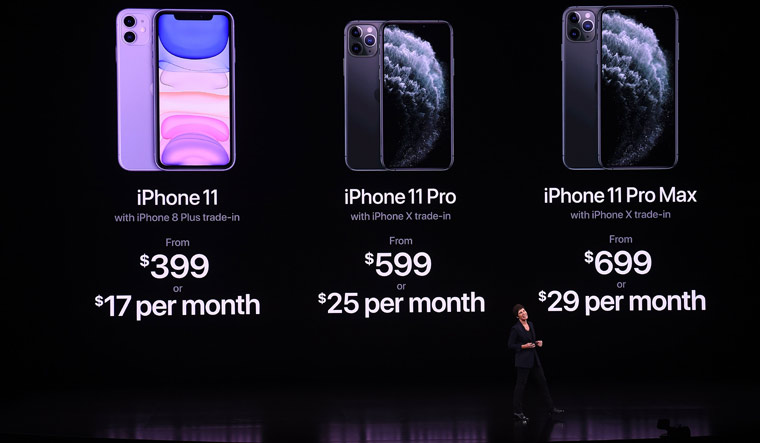 The rollout of the new iPhone 11 series by Apple | AFP

The release of a new series of iPhones hogged the headlines on Tuesday night. The addition of slicker design, meatier batteries and processor, complete with a cheaper price for the base model, seemed to hint Apple wanted to focus on the booming lower-cost markets such as China.

But a day later, analysts have warned the iPhone 11 may find it difficult to compete with Chinese smartphone makers due to two reasons: lack of support for the 5G wireless standard and the ongoing trade war between Beijing and Washington.

Chinese companies have taken a lead in development of the 5G standard, which allows for quicker internet download speeds and high network reliability. According to US company Verizon, the 5G standard will allow for working of autonomous cars, smart communities, industrial IoT and even remote surgery.

In June, China granted 5G licences to China Mobile, China Unicom, China Telecom and China Broadcasting Network. In May, China Daily, a state-run publication, reported 5G services would be rolled out in 40 cities on October 1, making China the third country after the US and South Korea to begin 5G services.

According to the GSMA, which represents major mobile carriers worldwide, China is set to become one of the world’s leading 5G markets with 460 million 5G connections forecast by 2025. 5G connections would account for 28 per cent of China’s total connections by this point.

Apple is currently in fifth position in the Chinese smartphone market, below local manufacturers such as Huawei and Xiaomi. Huawei has already unveiled 5G-compatible phones and its upcoming flagship, Mate 30 Pro, will use Huawei's in-house Kirin 990 5G processor. Xiaomi, Oppo and Vivo are all due to launch 5G phones in the Chinese market. However, a 5G-enabled iPhone is not expected until 2020.

Bloomberg quoted James Yan of Counterpoint Research as saying Apple will miss out on replacement smartphone orders in 2020. He told Bloomberg up to “90 million 5G phones would be shipped in China in 2020, a steep increase from the 3 million units forecast to be shipped by the end of this year”.

Edison Lee, an analyst with Jefferies, told the South China Morning Post, “Many Chinese consumers are unlikely to fork out 6,000 yuan ($843) or more for a 4G smartphone, knowing that many more 5G handset models will come to market in the first half of next year.”

Neil Shah, an analyst with Counterpoint Research, told Reuters that the prices of the new iPhone variants, “while lowered by Apple, remain high compared to local rivals”. He explained that the high prices, combined with lack of 5G, made the new iPhones “less attractive and future-proof” for Chinese consumers. Shah forecast “Apple will sell 30-35 million iPhones in China this year, down from 63 million phones in 2015”.

In addition to iPhones being pricier than offerings from the likes of Oppo and Xiaomi, market analysts have also warned of the impact of the ongoing trade war with the US.

Mia Huang, an analyst with TrendForce quoted by Bloomberg, noted the “raging trade war is likely to weaken iPhone sales in China”. According to Canalys, a market research firm, Huawei capitalised on a surge in patriotic sentiments to record a 1/3 surge in smartphone shipments in China in the second quarter of this year. Its market share hit 38 per cent, even as sales of Apple iPhones fell.