Liabilities of Jet Airways are over Rs 36,000 crore, while assets include 14 planes 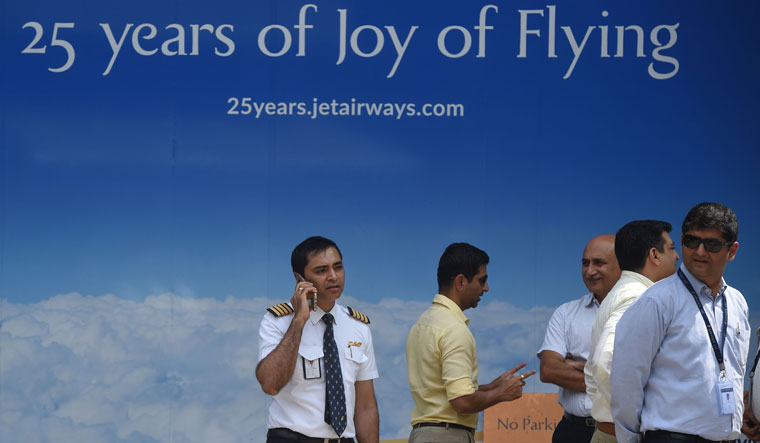 The lenders to the bankrupt Jet Airways, who met in Mumbai on Tuesday for the first time since the carrier was sent to the National Company Law Tribunal, are understood to have decided to call for expressions of interest to sell the meagre assets of the airline by Saturday.

The airline's meagre assets include 14 aircraft including 10 Boeing planes—down from 124 before the grounding—and 49 percent stake in JetPrivilege and a few buildings. The liabilities of Jet Airways are over Rs 36,000 crore, including more than Rs 10,000 crore of vendor dues, Rs 8,500 crore along with interest to the lenders, over Rs 3,000 crore in salary dues and more than Rs 13,500 crore in accumulated losses of the past three years.

Jet Airways is no more a going concern and had for many years run into negative net worth.

The lenders also list spares, slots and routes as the "assets" of Jet Airways that was promoted by Naresh Goyal and operated its last flight on April 17. The airline was sent to the NCLT on June 17.

But it can be noted that the government had temporarily given away all Jet Airways domestic slots in April itself and its international routes in June.

The insolvency resolution professional for Jet Airways, Ashish Chhawchharia, and the lenders led by State Bank of India will be laying down the bidding criteria, a source told PTI.

Financial creditors have made a claim of Rs 8,500 crore, while the claims from operational creditors and employees—which are much higher than the former—are yet to be verified, the source said.

The National Company Law Tribunal had on June 20 admitted the insolvency petition filed by the lenders against Jet Airways, and directed the resolution professional to try to finish the process within three months.

The tribunal had cited the "national importance" of Jet Airways while directing a faster resolution process, than 180 days allowed under the bankruptcy code.

Before it was sent to the NCLT, the banks, which own half of the shares in the airline had sought expressions of interest from both strategic and financial investors to sell between 31.2 and 75 per cent stake.

The banks had received four non-binding EoIs in April, while Etihad Airways, which owns 24 percent in the carrier, had submitted a conditional bid. But none of the bidders moved forward. Later, late last month, the employees had moved the NCLT seeking to take over the airline with an unknown entity.