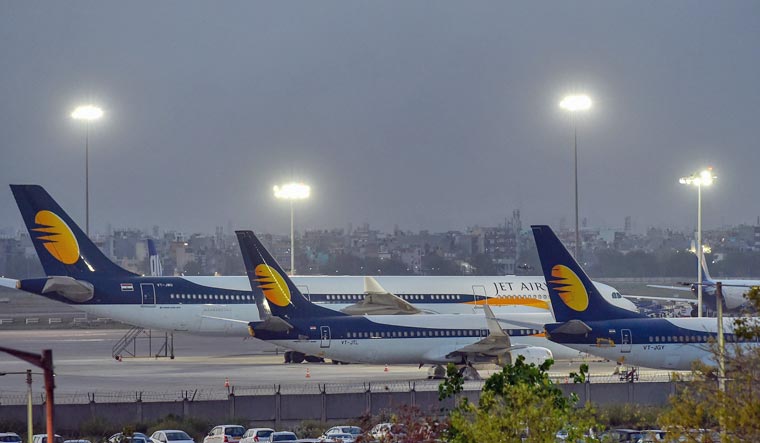 Jet Airways planes are seen parked at the domestic airport, in New Delhi, on Friday | PTI

After days of speculation, cash strapped Jet Airways on Wednesday announced temporary suspension of its operations, after it failed to receive emergency funding from the consortium of lenders.

The full service carrier, which made losses for the last four quarters, and had a debt of around Rs 7,654 crore as of December 2018, has seen much of its fleet grounded and several of its planes deregistered by the Directorate General of Civil Aviation (DGCA) on the request of lessors, after it failed to pay the lease. It had also delayed salaries to its employees.

On March 25, Naresh Goyal had agreed to step down as the chairman of Jet Airways, paving the way for lenders to gain control of the airline. The consortium of lenders led by the State Bank of India (SBI) had said Rs 1,500 crore would be injected into the airline immediately. However, the lenders were reluctant to provide further funding as the airlines fleet dwindled.

On Tuesday, the Jet Airways management had sought an emergency funding of Rs 400 crore to stay afloat, but with that not coming, the airline has no choice but to halt operations.

“Late last night, Jet Airways was informed by SBI, on behalf of the consortium of Indian Lenders, that they are unable to consider its request for critical interim funding. Since no emergency funding from the lenders or any other source is forthcoming, the airline will not be able to pay for fuel or other critical services to keep the operations going,” the airline said.

Jet Airways, which had already suspended international flights until Thursday, said it is compelled to cancel all its international and domestic flights. The last flight will be on Wednesday night.

The airline said that over the last several weeks and months, it had tried every means possible to seek both interim and long-term funding. However, despite its very best efforts, the airline has been left with no other choice but to go ahead with a temporary suspension of flight operations, a decision taken after a “painstaking evaluation of all alternatives” available to it and after receiving advice on the same from its board of directors.

It was 25 years ago that Jet Airways, promoted by Naresh Goyal, took to the skies and flew through many storms like the 9/11 terror attacks in the US and the 2008 global financial crisis. Many of its early competitors in the 1990s crashed long ago. In 2013, it got a lifeline when Abu Dhabi-based airline Etihad picked up a 24 per cent stake for Rs 2,050 crore. However, Jet’s seems to have finally run out of luck.

“This has been a very difficult decision but without interim funding, the airline is simply unable to conduct flight operations in a manner that delivers to the very reasonable expectations of its guests, employees, partners and service providers,” it said.

All eyes will now be on the stake sale process initiated by the consortium of lenders and whether Etihad will once again come to the rescue of the airline. Last week, the lenders had called for expression of interest (EOI) from interested parties. Etihad, apart from a couple of private equity firms, is learnt to have submitted EOI, although there has been no official statement on that front. The National Investment and Infrastructure Fund (NIIF) is also likely to bid.

An Etihad spokesperson had said earlier that it wouldn’t comment on “rumour or speculation”.

Goyal had also reportedly submitted an EOI, but has since backed out.

The lenders have told the airline that bid documents to the eligible recipients have been issued on Wednesday. The bid documents have solicited plans for a quick revival of the company and the bid process will conclude on May 10.

“We are actively working to try and ensure that the bid process leads to a viable solution for the company,” the lenders have further said.

Jet Airways said it will continue to support the bid process and will await the bid finalisation. It is hopeful that it will be able to bring “the joy of flying back to its guests” soon.

But, for now, its a bleak future for its 20,000 employees, unless an investor emerges. Passengers who had booked Jet Airways to travel in the summer holidays must also look for other alternatives.

The National Aviators Guild, the pilots body of Jet Airways, has already sent legal notice to the management seeking the unpaid dues.

Even if the lenders are successful in finding a buyer, there will be multiple challenges for the new investor. The airline, which had 120 planes in its fleet until recently, is now left with less than 10. Lessors have already requested deregistration of several of the planes, which are grounded, so that they can be flown out of India and then leased out to any other airline. Some of them have already been deregistered, according to DGCA’s website. Further more, the operators of airports such as Mumbai and Delhi, which are already congested, may allot the slots left vacant after Jet’s grounding to other airlines.

This will be the second major airline to have shut down due to financial difficulties in this decade. Vijay Mallya-owned Kingfisher had crashed in 2012. SpiceJet was on the verge of collapse in late 2014, but was rescued by Ajay Singh, one of its earlier promoters.