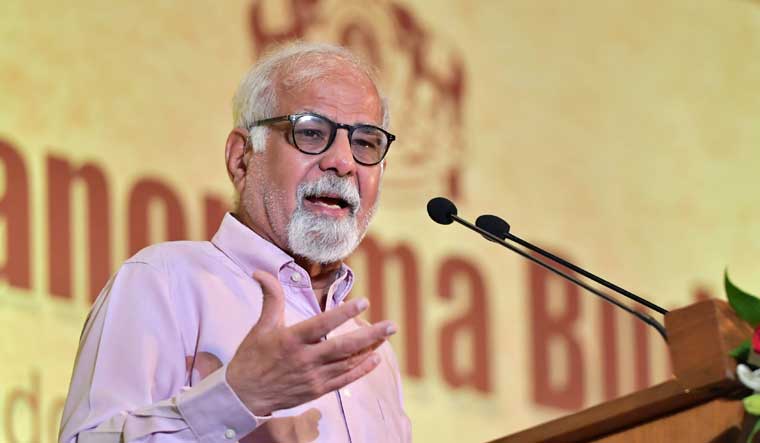 The first budget of the second Narendra Modi-led goverment is a deviation from the past and has paved way for a new era of budget making, observed eminent economist Surjit S. Bhalla. “The budget is no more a financial statement by accountants, for accountants. It has now become a vision document for the future suggesting long-term possibilities, long-term policies and long-term projections,” said Bhalla while delivering the 20th Malayala Manorama Budget Lecture in Kochi.

“Around the world, policies are made in consensus and consultation with NGOs, economists, and policy makers along with the government, to figure out what the next best policy is. All policy changes and directives are not made on the budget, so that everything is transparent. And that is where we are going to,” said Bhalla. He added, with the introduction of GST Council, indirect tax policies have been completely removed from the ambit of the Union budget. Now, changes in direct tax policies and “tinkerisation” of import duties will also fade away from the budget as India moves towards the “future budget” and it would remain a part of the old methods of political economy.

Bhalla observed that the expectations from the budget were very high since the new government was formed with a huge mandate and many saw it is an opportunity for big bang reforms. Stressing the idea of a 'future budget' he said, “the budget is no longer a thumping statement and when it came out it was very good on vision, but not that good in terms of satisfying the expectations that it would be a breakthrough in government's approach towards economic policy.”

Bhalla pointed out “the good, the bad and the ugly” in Finance Minister Nirmala Sitharaman's maiden budget. “The good”, he said is the big vision put forward by the Modi-led government of making India a $5 trillion economy by 2025. “Good sense finally prevails and the target to double India's GDP in dollar terms is very, very achievable... India's GDP in 2018-19 stood at $3.1 trillion and to reach the target of $5 trillion, the country should have an annual growth in nominal dollar income of 9.5 per cent. Even if the rupee depreciates by 1.5 per cent we can still reach the target,” he pointed out.

Speaking about the government's aim to double farmers' income by 2022, Bhalla said, “there is no way by conventional calculation that we will be able to double farmers' income as it requires a 10 per cent growth rate for seven years.” He added that without freeing the agriculture sector from licensing, it is impossible to reach anywhere near the high growth rate of around 10 per cent. He also called for the abolition of Public Distribution System, Agricultural Produce Market Committee, and Essential Commodities Act, so as to evade the corruption by intermediaries. “In India, throughout the history, we have mixed production and pricing... Production should be allowed to maximise and cash transfers, which are very efficient now, can be used to redress the imbalance in distribution of income,” said Bhalla.

The former member of PM-EAC said Indian policy makers must understand that the world has changed, both in terms of inflation, which is around 2 per cent in many countries, and technology. India now enjoys an inflation that is close to the global inflation rates. Now the policy makers, especially the RBI, must recognise inflation rates are no longer an issue. Bhalla said India must utilise this scenario to formulate policies that is best suited to ensure a high growth rate and development.

Bhalla, a staunch supporter of Modi's controversial demonetisation, pointed out that the government's tax proposal in the budget would lead to increased tax arbitrage. He said Indian industries face the twin troubles of highest real interest rates and highest tax rates in the world. At present, “what India requires is an increase in tax compliance and decrease in tax evasion. But the budget did just the opposite.”

He also reminded the policy makers in the country that, “wealth can't be redistributed without creating it.”

THE WEEK Editor-in-Charge V.S. Jayaschandran, in his thank you note, lauded Bhalla for his close prediction of 2019 Lok Sabha election results in the book, Citizen Raj: Indian Elections 1952-2019.