ANI reported Air India's systems had been restored, but this has not been confirmed 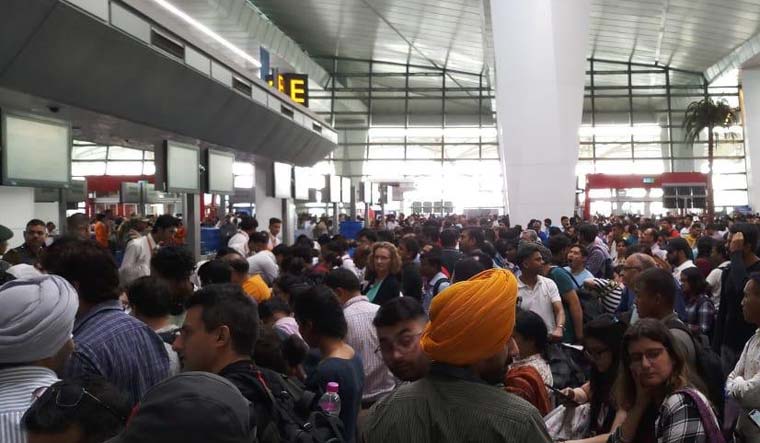 Thousands of Air India passengers faced a rude shock on Saturday morning as long queues welcomed them at airports. From the wee hours of Saturday, the national carrier's flight management system stopped functioning, leading to long delays for nearly all the 400-plus Air India flights across the globe.

News agency ANI reported by 9am, Air India's systems had been restored, but this has not been confirmed by the carrier.

At Delhi Airport's T3 departure terminal, long queues of passengers were seen. Tiffs with security personnel were a common occurrence as they sought to control the large crowd. The scene was similar at Mumbai Airport's departure lobby. According to airport officials in Delhi and Mumbai, all Air India flight operations were halted, leading to a glut of all outbound passengers.

"SITA servers are down. Due to which flight operation is affected. Our technical teams are at work and soon system may be recovered," said an Air India statement issued to passengers.

Air India officials said that the problem was caused by a system crash on Air India's end. "A team from SITA, our IT team as well as people from other departments are looking into this problem that occurred today early morning," an Air India spokesperson told THE WEEK.

He, however, said he cannot make any assurances as to how soon the online flight management system will be up again. "It might be resolved very soon or it may take a few hours. We do not know," he said.

"We are calling out seat numbers issued to each other. But still, there are some mistakes and same seat is getting issued at times to more than one passenger," said an Air India ticketing staffer at Kochi International airport.

According to Air India officials in New Delhi, the problem had affected all of their 400-plus flights on Saturday. "I have never witnessed anything like this before. So many people are troubled by this problem. I hope Air India takes some lessons from this," said Bikas Singh, an IT consultant posted at Thiruvananthapuram and travelling to Delhi on Saturday.