The untold story of Indian IT industry 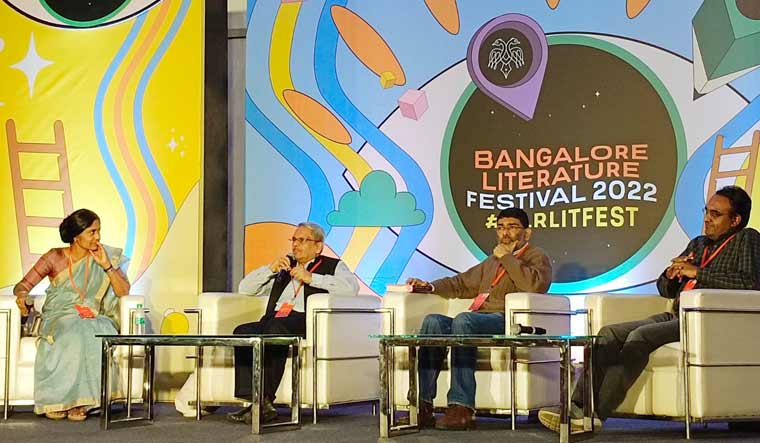 The IT revolution in India has led to democratisation of access to technology. The digital public goods and private innovation is a unique contribution of India to the world as the world needs new models of development that make solutions not just accessible but also equitable and affordable to the 8 billion population of the world as we are set to grow from a three-trillion dollar economy to 20 or 30-million dollar economy, said Kris Gopalakrishnan, co-founder of Infosys who has co-authored Against All Odds: The IT Story of India along with two other IT stalwarts N. Dayasindhu and Krishnan Narayanan.

Introducing the book during the two-day Bangalore Literature Festival that concluded on Sunday, Kris shared the experience of being an insider and the effort taken to document the story of the birth and growth of the Information Technology industry in India, the ideas and thoughts of the pioneers who birthed a whole new industry while infusing global standards of work culture and ethics in the Indian DNA.

The book came about as there was an urge to document the rich professional heritage of the IT industry, as the younger generation of IT professionals, too, seemed to be oblivious to the fascinating story.

“We got fantastic support from all the who created this industry in India, from F.C. Kohli to Prof H.N. Mahabala, Narayana Murthy to Nandan Nilekani and Azim Premji. They gave us up to four-five hours. We documented their stories as videos and published them on the web and we decided to write the book when we realised that we needed multiple ways to steer the story. Personally, I feel we were lucky to document the stories of these heroes. There are many events that even I did not know before we embarked on this exercise,” he said.

Recalling a lesser-known fact, Kris narrated how Dr Homi Bhabha was actually the creator of many things that are relevant to India today, including computers.

Bhabha wrote a report at Tata Institute of Fundamental Research (TIFR) in 1959 on the need for computer education and the need for India to embark on a computer industry.

“In 1962, TIFR released the first digital computer for scientific applications - ‘TIFRAC’. Joined MTech computer science in 1965 when IIT Kanpur started the first computer science school. We need to recognise all these events and people and as the starting points for this industry in India,” said Kris.

The authors give the Indian government the credit for playing an enabling role in the development of the IT industry, especially for setting up software technology parks, giving tax breaks for exports and creating parks in various states to set up world-class IT campuses.

“Both the Centre and the state were clearly supportive and interestingly the bureaucrats responsible for making policies were also technocrats like Dr Seshagiri, N. Vittal and B.V. Naidu. The software technology parks were also the best example of a single-window clearance system, where one agency would give all approvals - from building plan to importing computers or software,” said Kris.

Krishnan recalled how the finance secretary had been skeptical about giving concessions to the sector saying it was only a 100-million industry, but soon discovered the industry had exceeded everyone’s expectations. “Mr Vittal had just taken over as the secretary of the department of electronics and the NASSCOM was in negotiations with the government. The finance secretary put a condition that the concessions would be granted if the industry reached the 400-million mark. But within a few years, it went beyond the target. It was a gamechanger,” he added.

The IT revolution also ushered in a new value system in the work ethics of Indian companies. “One of the fascinating aspects of the IT industry is that it was all started by professionals. What we learnt early on was like they say we all can disagree but we cannot be disagreeable to each other. The bedrock of the industry is talent, the professionals, the college-educated folks like you and me. The premium on hard work was laid very early on and people used to spend reasonably long hours at work and were doing new things till then unknown in India. Imagine a set of folks in their early twenties who have just joined a company, going and finishing a project in the US, interacting with folks, their clients and to complete the project. So all that brought in a lot of values,” said Dayasindhu.

Kris added that the values agreed upon were not built organically but an outcome of a very conscious decision to encode the values during the training period and it was reinforced every year by identifying a value champion and rewarding him.

“The value champions were those who had gone beyond the call of duty, demonstrated values that led to customer satisfaction or done social work or had taken initiatives to save money for the company. These values must be documented and practiced on a daily basis. The value comes from simple practices like traveling economy class for flights that take less than three hours, which holds true for the CEO down to the ranks. These are practiced not in just one company but across the industries, by large companies like Wipro, TCS as we need to build trust among our stakeholders. This is reflected when we talk to the government as a single voice and they listen to it. So, it clearly pays to do the right thing,” said Kris, adding that trust-building is crucial for entrepreneurship.

Democratisation of wealth through the employee stock ownership plan (ESOP) framework, gave a sense of ownership and participation, confided Dayasindhu, who recalls one of his most spiritual moments at Infosys global education centre in Mysore where close to 10,000 fresh college-educated recruits were being trained.

"It is when it dawns on you what this industry is all about and what it is doing to a country like India, which is moving up the event chain. The single most contribution of this industry has been to ensure a lot more people are brought into the middle class. And there are 15 million people who are indirectly working with the IT industry."

"On an average. I think India has about 20 per cent women in our workforce. But in the IT industry, it is about 40 per cent and they are qualitative jobs," added Kris, summing up the societal impact of the IT industry.