Why M.F. Husain is the most sought-after Indian artist in 2020 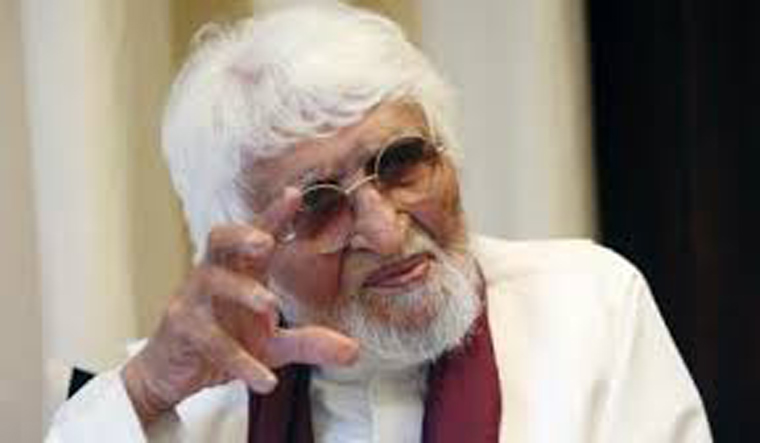 Spanning 20 feet, M.F. Husain’s 1958 oil-on-canvas ‘Voices’ is a curious amalgam of shapes and symbols. There is a dark scaffolding of a shelter on one side, damp shades of green enmeshed with vague human outlines in the middle, followed by a grey and blue realm with an indistinct form of a horse’s hoof. Or so it appears. There’s always a tendency to look for horses in the master-painter’s sweeping oeuvre since he began painting the animal in the early 1950s. Yet ‘Voices’ eschews any direct representation of the valiant animal or the painter’s typical figurative style but represents a rich, expansive collectivity of a diverse nation, in fact an abstract assemblage of his many stylistic flourishes.

‘Voices’ broke all previous auction actualizations of the painter, selling for Rs 18.47 crore, the highest-ever for Husain who is India’s most important 20th-century artist, a trailblazer in modern Indian art. The online auction by AstaGuru on Sunday, as part of a solo artist auction “Husain”,  fetched the record price for the artist whose last sale record of Rs 13.44 crore was set in March 2020 for ‘Battle of Ganga and Jamuna: Mahabharata 12’ in a Saffronart auction of seized items from the fugitive businessman Nirav Modi’s estate. The entire auction “Husain” achieved  more than Rs 55 crore in total sales revenue from 34 artworks spanning a collection of paintings, jewellery, tapestry and toys. This makes the late M.F. Husain the most sought after Indian artist in 2020 so far.

“While the economy is grappling with a slowdown, the Indian art market has been recording solid trade. Artery India Knowledge reports that the artist with the highest turnover since January is M.F. Husain, with Rs 98.7 crores realised from 88 works,” says Arvind Vijaymohan, CEO of Artery India, an art market intelligence and asset advisory firm.

Vijaymohan says that some of the strongest art acquisition opportunities arise in recessionary times.

“From January 2020 till date, new global price records have been established for 67 Indian artists—ranging from Rs 13,992 to Rs. 18.4 crores. Of further importance, since April 2020, 685 works have been successfully sold to realise a turnover of Rs 201.7 crores. Amongst these, 46 works have sold for over Rs 1 crore each,” confirm Vijaymohan.

‘Voices’ was created during a significant phase in Husain’s career in the late 1950s, when he was steadily gaining international repute and his art practice and philosophy was visible on a global stage. The artwork itself was highly commended internationally even back then and won him the International Biennale Award at the Tokyo Biennale in 1959. This further led to him receiving a Rockefeller scholarship later that year to study in New York where his style was further enriched by exposure to abstract expressionists. The painting enjoys an extensive exhibition history and was also shown at a retrospective in 2005 at the Jehangir Art Gallery in Mumbai. But this is the first time that ‘Voices’ came up for auction.

“‘Voices’ is a masterpiece by M.F. Husain and is amongst his top three works, following ‘Between the Spider and the Lamp’ and ‘Zameen’. He created this work to proclaim India’s evolving and unified ‘Voice’ as a nation to the world,” says Tushar Sethi, CEO of AstaGuru. “The work is his largest from the 1950s. The artist proved his mettle and artistic virtuosity through such iconic works, and garnered a global reputation.”

Romanticised as “India’s Picasso” for adapting a Cubist style, Husain began his artistic career by painting cinema posters after attending art school in then Bombay. Husain spent the last few years of his life in a self-imposed exile—living between Dubai, Qatar and London—after being hounded by right-wing fundamentalists in India over perceived obscenity in artworks depicting Hindu deities. He died in London in 2011, aged 95.