Naisukh is now streaming in the India section of Mubi 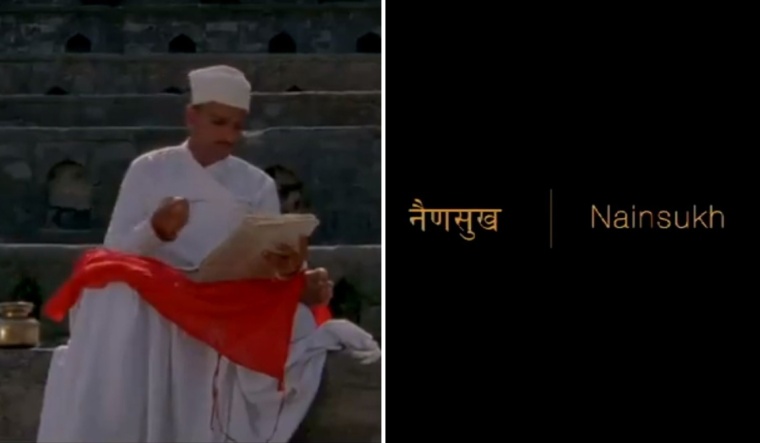 Screengrabs from the trailer of ‘Nainsukh’

Nainsukh of Guler was one of the foremost artists in the Pahari School of miniature painting. He is the most cherished, the most documented of painters to emerge from 18th century Punjab hill states of the Himalayan foothills.

Active around 1735 AD and born to a painter father Pandit Seu, Nainsukh used his fine-grained training in miniatures to branch out and develop an individualistic style based on sharp observation of situation and moods—a style he perfected after moving away from his father’s atelier in Guler (in Kangra district) to Jasrota under the patronage of Mian Zorawar Singh and his son Balwant. Nainsukh’s astonishing body of work produced at Jasrota (in present-day Jammu), inspired by the daily, non-essential details of his patron’s life—like studying a picture of Krishna, writing a letter, standing at the palace window, the prince getting his beard trimmed, lion and tiger hunting trips and evening dances in moonlit corridors of the majestic fort—comprise the important and productive phase of his artistic career.

These images come alive in Nainsukh, filmmaker Amit Dutta’s 2010 celluloid homage to the extraordinary painter. The 120-minute film is a lush, symmetrical, clean, poetic, crystalline montage of Nainsukh’s efflorescence as a painter in Jasrota, tracing his own painterly language and his tender, abiding relationship with his patron Raja Balwant Singh.

Naisukh is now streaming in the India section of Mubi. At the 67th Venice Film Festival held in 2010, Nainsukh was rated one of the top 10 films to watch by  Film Comment.  Hailed by critics and art historians alike, Dutta’s masterly composition and frames—as behoves a painter of Naisukh’s stature—ensured the film was screened in prominent museums, including MoMa in New York.

It was art historian B.N. Goswamy’s assiduous research on Kangra paintings that unearthed the life and legend of the 18th century Pahari painter from Guler, otherwise lost to the annals of time. Goswamy tracked down most of Nainsukh’s paintings and reconstructed his life from scratch. Thanks to his efforts, most of Nainsukh’s paintings now occupy pride of place in some of the leading museums of London, Zurich, New York and Delhi. The painting titled ‘A Leisurely Ride’, considered Nainsukh’s masterpiece, resides in London’s Victoria and Albert Museum. Nainsukh has been produced by German art historian and ethnologist Eberhard Fischer, former director of the Swiss Museum Rietberg which houses one of the best collections of Indian Pahari paintings.

Nainsukh is a must watch for anyone interested to witness a finely-crafted intersection of art, cinema, music, poetry and heritage, imbued with a sonorous silence.