India's first coffee-infused gin to hit the shelves in Delhi

The limited-edition gin does not use sugar, coffee extracts or artificial flavours 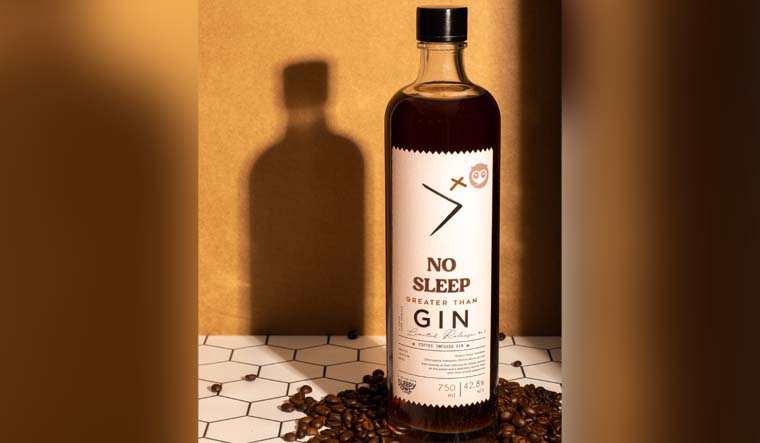 No Sleep by GT & Sleepy Owl

Trust Nao Spirits - India's first ever craft gin brand which gave us the now di rigueur Greater Than - to do just that. Their No Sleep gin brings together two of the most popular beverages together, gin and coffee, as well as two innovative brands which are pioneers in their own right. Like Greater Than, Sleepy Owl made their mark by launching India’s first cold brew coffee. With their collaboration is born what would seem like formalising the inevitable - our countless attempts to play around with coffee and alcohol. There's an espresso machine in every respectable bar, and coffee cocktails regularly feature in "how to make" hacks and listicles. But one would be hard-pressed to find a coffee-infused gin in all its brown boldness as a bottled product.

While the idea itself had been brewing since the launch of Greater Than in 2017, it took a pandemic-induced lockdown to test and measure the kinds of coffee which would pair well with gin and tonic. "In our first few months of distilling Greater Than, between me and my co-distiller (Jay Dhawan), we would often have fairly late nights and fairly early mornings. On one of those late nights, he said, let's see if the cold brew coffee in the fridge works well as a cocktail mixer with the gin. We created a gin and tonic with a float of cold brew on top. And we absolutely loved it," recalls Anand Virmani, co-founder and distiller at Nao Spirits. "I had three of them and did not get any sleep. And I had an early morning flight to catch," says Virmani, pointing out the genesis of a coffee cocktail which became a signature in their directory. It was in 2020 that Dhawan suggested if coffee itself could be infused in the gin as a standalone piece, so people can have it with tonic water at home. Or make an espresso martini or a negroni.

The limited-edition gin does not use any sugar, coffee extracts or artificial flavours. Instead, Nao Spirits got Sleepy Owl to make a smooth, cold brew using 100 per cent Arabica coffee from Chikmagalur to infuse in their gin distillate. The result is a concoction which is simultaneously bold, crisp and fruity with a smoky aftertaste. There are tasting notes of red cherries, salted caramel and hints of pink peppercorn. "It was in the last one year that we were able to see how the tasting notes developed. It isn't just a combination of coffee and gin. It's a whole new dimension altogether," says Virmani, who is currently based in Goa. Already in stores in Goa, Karnataka, and Maharashtra, No Sleep will enter Delhi in the next two days.

"Unfortunately, Jay, our co-distiller, is not with us to see the launch. We lost him in August last year in an accident," adds Virmani, highlighting that ultimately No Sleep's emotional undertones are much more difficult to express. Virmani first met Jay as a mixologist at The Bombay Canteen, one of India's most celebrated restaurants. "No Sleep was his idea and it is dedicated to him."

DOJA: Goa-based East-Side Distillery has launched the first ever Indo-Japanese gin DOJA. Started by Jai Anand, DOJA is an amalgamation of botanicals from India and Japan's Wakayama prefecture. Anand, who is also the founder of the Mumbai-based music curator agency Milkman, wanted to bring to India a combination of flavours never heard before in gin-making. He worked along with a distillery in Japan and created a recipe which employs Yuzu, sansho peppers and hinoki from Japan with coriander, pepper, and cardamom from India. DOJA is a sip and drink beverage and is priced at Rs 2,050 in Goa and Rs 3,700 in Mumbai.

Tamras: Yet another entrant from Goa pushing the envelope in craft gin space is Tamras Gin which was launched in December. It is a blend of 16 botanicals which includes lemon verbena, cubeb pepper, lotus flower and seeds. Created by a screenwriter and ad filmmaker couple, it is produced at north Goa's Adventurist Spirits Distillery where they also take visitors on a guided tour. Tamras is available in Goa and Mumbai for now.