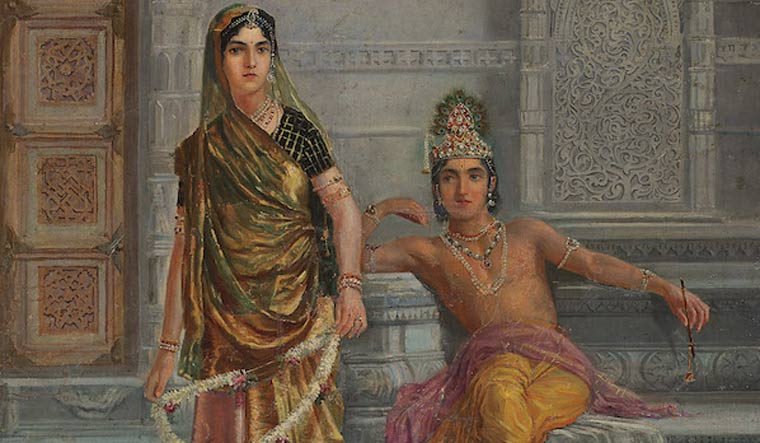 On a Reddit thread for the 1915 painting 'Radha and Krishna' by M.V. Dhurandhar, a user comments,"Petty awesome but... Why do Radha and Krishna look European?? Like Greeks or something."

To which another user remarks, "Maybe the colonists had an influence? The room looks Greek as well, or at least inspired by the Greeks."

The oil-on-canvas in the Western academic style of painting where Radha looks at the viewer with a garland in her hand with Krishna seated behind her with a flute is now on view at DAG's online sale and exhibition called 'The World Will Go On'. Here 88 lots and 127 works of fine art have been virtually mounted as part of the exhibition 'The World Will Go On'. It features rare paintings from the 19th century onwards when European and Indian art met to create a hybrid vocabulary.

The virtual preview started on 25 October through a seamlessly accessible online viewing room on the gallery website. The works are also on display at the DAG at The Claridges till November 12, 2020. The 'World Will Go On' celebrates India’s visual language of pre-modern and modern art. Leading the sale will be two series on the Ramayana—the first, a set of accomplished prints by the artist Chittaprosad, and the other a complete set of water-colour paintings by Laxman Pai.

'Radha and Krishna' uses the naturalistic portrayal of "bhava" or emotion and achieved academically precise delineation by Dhurandhar who was known to use photographs as reference. Born in Kolhapur and trained at the JJ School of Art in Mumbai, Dhurandhar was also an accomplished postcard artist and created illustrations in oil, watercolour and pencil in his time that ranged from bazaar prints and ethnographic postcards to books and cartoons for magazines and posters. He was inspired by Raja Ravi Varma.

Rather apolitical, Dhurandhar was more attracted to the female form and exquisitely captured their varying moods and gestures. He was awarded a British Government Award in 1892 for a painting titled 'Women At Work'.

Radha, in the 1915 painting, has a faraway look on her face, while Krishna's eyes are on her. A peacock in the foreground also stares at Radha. Both Radha and Krishna are much admired subjects in Indian art for centuries; here they have a more modern, realistic appearance.