When he was in his 60s, Rajinder Singh—now more popular as Skipping Sikh—could pull 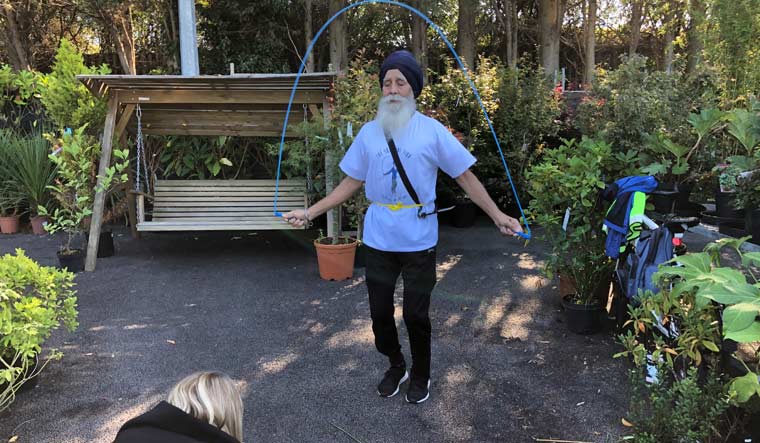 When he was in his 60s, Rajinder Singh—now more popular as Skipping Sikh—could pull off 5,000 jumps in a day with his rope. Now the septuagenarian Sikh from Harlington in west London can clock two hundred jumps in a minute. On October 23, Amritsar-born Rajinder Singh will turn 74. "I will go to the gurdwara first, then go do a skipping challenge with Khalsa primary school kids and teachers in Slough. Later, (I will) take some cake and food to the homeless shelters," says Singh over email, two days before he celebrates his birthday in a year which has turned out to be quite special for the senior Skipping Sikh.

On October 10, Rajinder Singh Harzall was featured in the Queen's Birthday Honours List of 2020 that felicitates recipients for their "outstanding contribution to British society". This list has 1,495 honours and 13 per cent of the awardees are from BAME (black, Asian and minority ethnic) communities. Harzall received an MBE (Member of the Most Excellent Order of the British Empire) for his services to health and fitness in a pandemic. In the early months of the UK lockdown, Harzall started posting videos of himself skipping to inspire the elderly to stay fit. In the process, he also raised over £12,000 for the NHS.

Harzall has been skipping since he was six years old. His father, Makhan Singh, was in the British Indian Army as a Naik (corporal) and served in the second World War. Harzall was born at Devi Das Pura in Amritsar in the year India got its Independence. "My father would always tell me how skipping was something he enjoyed. It was a way for him to keep busy and stay out of negative thoughts," says Harzall who imbibed his father's fitness streak. He hopes to run a marathon like British Sikh centenarian Fauja Singh who, in 2011, became perhaps the oldest person to have run a marathon.

"I have always been into sports. I have never gone to a gym. I made my own fitness plans and skipping has always been part of my life. I have run marathons and most charity events which involve some exercise," says Harzall who moved to England from Punjab in the 1970s. Harzall, a former Heathrow Airport driver, received a letter of appreciation from UK PM Boris Johnson in June this year. He was inspired to take up the skipping challenge from the 100-year-old army veteran Tom Moore, who raised more than 100 million pounds for the NHS. Moore walked 100 laps of his garden in April with the help of a walking frame in the lead up to his 100th birthday in April. The World War II veteran became a national hero and received a knighthood in July.

"I would like to do more workshops in schools and community centres and encourage everyone regardless of age that you can keep fit and active. Age in nothing but a number," says Harzall on how he hopes to use his MBE to further promote fitness. "I have lived through other pandemics and to be honest, I always think the best way to tackle anxiety is to pray and be positive. Why worry when we are not in control?"