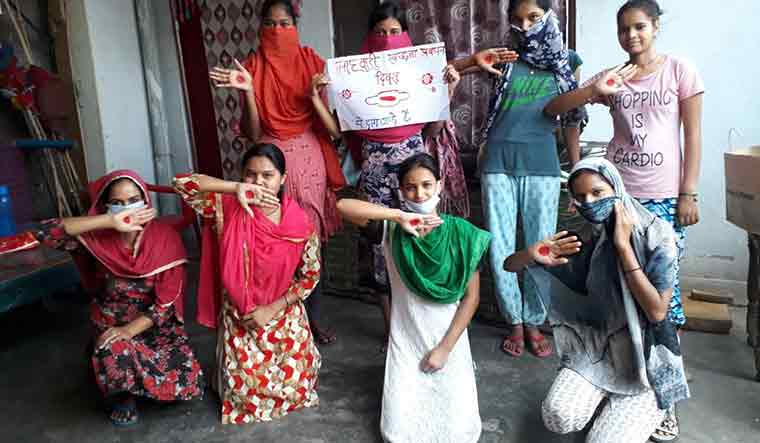 For 17-year-old Hina who hails from Lucknow, a relatively simple skill—making sanitary pads—was her strongest ally during the initial days of the COVID-19 lockdown.

“Periods are considered shameful. During the lockdown when even medicine shops were closed, many girls were worried how they would manage,” says Hina.

On March 30, sanitary napkins were included as essential items eligible for supply chain operations. But like sanitisers and face masks they were sold out in many locations. Immediate relief work focussed on making ration available, pushing menstrual health concerns off the map.

For Hina and 14 other girls in her neighbourhood, this was something they were empowered to tackle.

“Home-made pads are more convenient to use. There is never enough money to spare to buy napkins from the market for adequate use during a cycle. You cannot have as many required to change every three to four hours and may end up with infections,” Shalu, 19, says.

Nazia, 15, says that having control over how one manages one’s periods often translates into control over other areas of life. “Once I could speak at my home about why I needed to be involved in the conversation about menstruation, I could also take on discrimination. For instance, I could question why my brother was given a glass of milk but I was not. It was like I was free”.

For 19-year-old Neelam, that empowerment meant she could tell her 60-year-old grandmother that it was alright for her to sleep with her as she was not ‘impure’ during those days. “Menstruating women are considered dirty in my state. They are banished to either living outside the home, with the cattle or in a separate room,” she says.

Hina, Shalu and Nazia in Lucknow, and Neelam in Nainital are adolescents who are talking about menstruation and making pads as part of an intervention started in 2018 by Sahayog to take the conversation on safe menstrual practices to different male and female stakeholders (including teachers and elected representatives) through 15 schools in the three districts of Jhansi, Lucknow and Nainital. The intervention supported by community-based organisations aims to break the taboos around menstruation and give girls the agency to manage it in safe settings.

Access to menstrual products, private and safe use and disposal—activities indicated by the broader term menstrual hygiene management (MHM)—are among the health rights most susceptible to neglect during a period of disaster or crises as repeated studies have found out.

According to a study published in Springer Nature on the aftermath of the 2015 earthquake in Nepal, ‘immediate relief activities by humanitarian agencies, lacked MHM activities’.

Though MHM guidelines were issued in 2015 under the Swacch Bharat Mission, the unprecedented nature of the current pandemic means even lesser attention than normal is paid to them.

Mithlesh Chaturvedi, Uttar Pradesh’s Director for Communicable Diseases says, “Periods are a normal phenomenon. There is nothing special that we are doing for them as part of COVID-19”.

This statement overlooks the fact that even the Swachh Bharat Mission guidelines mentioned above, single out UP for its low levels of awareness about menstrual health and thus its management.

Poor awareness and resource poor settings, such as the ones the above mentioned adolescents inhabit, make girls the butt of jokes, and the target of discrimination leading to suspension of studies and thus a compromised future. A study conducted in 2014 put the number of girls dropping out of school worldwide at onset of menstruation at 23 million.

This is due to lack of access to sanitary pads, as well as to lack of a safe changing place at school.

Neelam says that one year into the intervention, she led her peers at college to demand a separate common room and toilet for girls to better manage their periods. “We have a bank of home-made sanitary napkins. All girls take from it and replenish it. No one misses classes because of periods now. Ever since we took on the principal for it, the boys too stopped making snide remarks at us”.

Cautioning against the possible long term impacts of neglecting menstrual health during the pandemic, a UNICEF brief issued in April 2000 said that while ‘..there is no evidence of impacts of COVID-19 on the menstrual cycle directly, though stress, anxiety and malnutrition can impact reproductive health. …(the) pandemic will, however, have secondary impacts on girls’ and women’s ability to manage their menstruation and their health’.

This year, May 28, observed as the Menstrual Hygiene Day, thus draws attention to the fact that periods don’t stop in pandemics. It calls for creating a world by 2030 in which no one is held back because of her periods. It emphasises that all agencies (the United Nations, public sector, corporates, philanthropy) enhance investment in menstrual health and hygiene to achieve this objective.

Investment in making one’s own sanitary pads is a skill that not only guards against the vagaries of supply as during the current situation, it also tackles the pollution caused by the non-biodegradable plastics that go into making commonly available and heavily publicised market brands.

“We have control not only on our lives but can do a greater good too”, as Hina says.