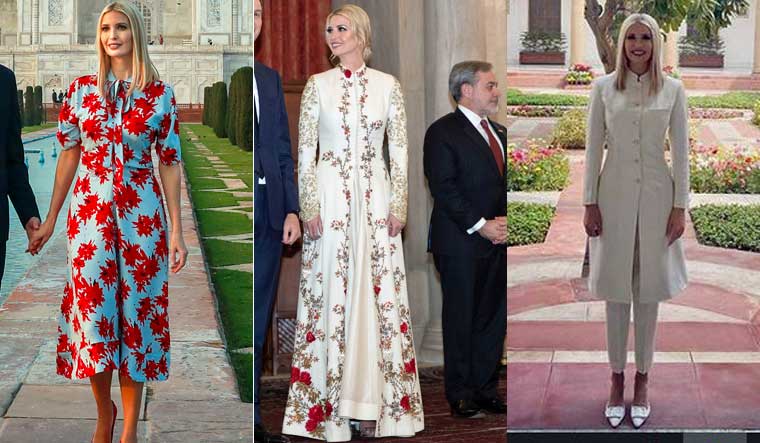 Ivanka Trump at the Taj Mahal | AP , at the state banquet dinner | PTI and touring the Rashtrapati Bhavan | Instagram

For the state dinner, businesswoman, author and mother of three Ivanka Trump wore an outfit by designer Rohit Bal. She looked simply stunning in a floor-length anarkali suit, which was from the Kashmiri designer's 'Guldastah' collection. The collection includes sarees, gowns and anarkalis embroidered with flowers that are native of the Kashmir Valley. The designer honoured his birthplace with the collection at Lakme Fashion Week in January 2019.

Her other outfits paid homage to the country she visited. Advisor to President Trump Ivanka, on day one, earned some brownie points from supporters of sustainable fashion by repeating a printed Proenza Schouler dress that exuded spring on her visit to the Taj Mahal. She had worn the dress on her trip to Argentina in September 2019.

The next day as she was on a tour of the Rashtrapati Bhavan, Ivanka chose to go desi in a bandhgala kurta and pants by Anita Dongre. Its to be noted that when the Duchess of Cambridge Catherine Middleton visited India, she too, chose an Anita Dongre dress. Former-first lady of US Hillary Clinton and Canada's first lady Sophie Grégoire Trudeau too, have donned Dongre's creations. 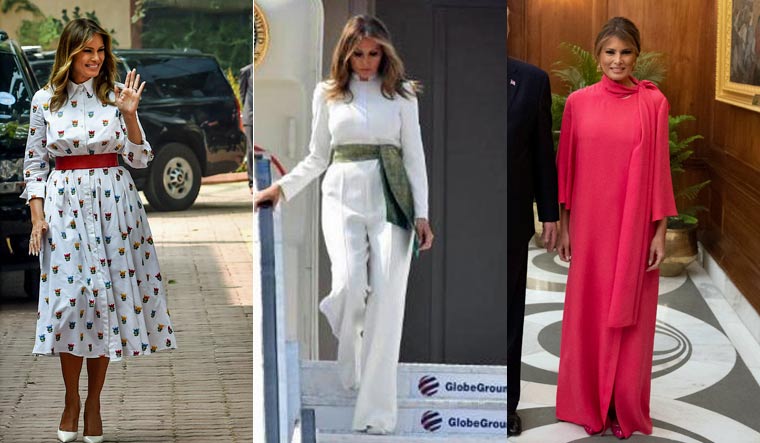 Melania Trump in a Carolina Herrera midi dress | AP, landing at Ahmedabad in a Herve Pierre jumpsuit | PTI and at the state banquet dinner | PTI

The first lady, as she boarded the Airforce One jet to India on February 23, rocked retro French flair in a black turtle-neck top, slim pants and buckled Roger Vivier flats. Trump sure has come a long way, fashion-wise since her early days in the White House. She was often seen in traditionally flashy European labels like Dolce & Gabbana and Gucci, occasionally wearing Celine, Givenchy or Ralph Lauren.

The former model, who often chooses her clothes, has worn some stylish numbers like a Chanel Haute Couture gown while hosting French President Emmanuel and First Lady Brigitte Macron in April 2018 to a Herve Pierre dress she wore while greeting Queen Raina of Jordan in Washington and a white pant-suit at the State of the Union speech in 2018— although she wore it to plausibly stand out in a sea of black-wearing Democrats who wore the colour to support the TimesUp and #MeToo movement.

On landing in India, Melania wore a white jumpsuit by designer Herve Pierre featuring a Nehru collar and a green brocade sash, tied neatly as a belt.

On day two at the Rashtrapati Bhavan and while attending a Happiness class at Delhi CM Kejriwal's model school, she wore a midi dress by Carolina Herrera, embroidered with colourful flowers.

On her last night in India, at the state dinner at Rashtrapati Bhavan with President Ram Nath Kovind, Melania made wore a floor-length Carolina Herrera dress with danglers that vaguely resembled jhumkas.

All-in-all it looks like, FLOTUS' sartorial choices were a safe bet with modestly cut out outfits and details like accessories paying homage to the country she visited.