Historical Gastronomica: The Indus Dining Experience is on till February 25 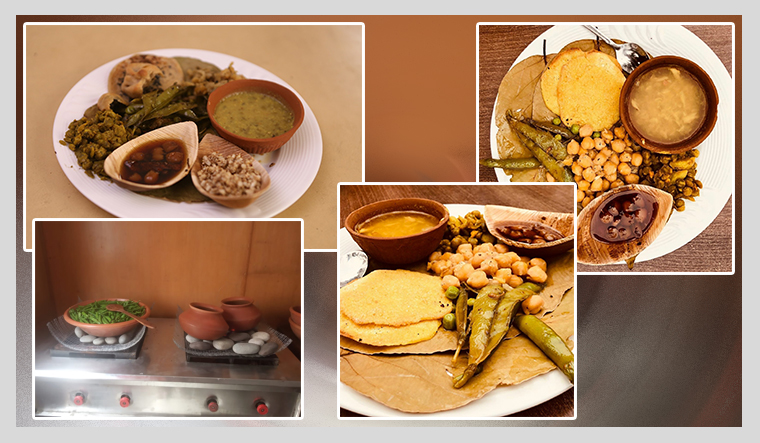 The ‘Historical Gastronomica: The Indus Dining Experience’ at the National Museum in Delhi has a specially crafted tasting menu on Harappan food culture that includes Khatti dal, Kachri ki sabzi, black gram stewed with jaggery and seasame oil, raggi ladu, thin barley griddle cakes, sweet rice with banana and honey and a special “Indus Valley Khichri”. However, it has removed its non-vegetarian options from its menu, which included meat fat soup, quail roasted in Saal patta and salt cured sheep, at the last minute.

What should a food pop-up at Delhi's National Museum be like? Considering it's one of the largest museums in India, housing the most significant art objects from the prehistoric to the modern era, it's a surprise how the idea of interpreting ancient history on a gustatory plane hasn't been explored yet.

Architect and conservation consultant Somi Chatterjee, during a walk-through for ‘Historical Gastronomica’ on Harappan food culture at the National Museum in Delhi, asks a group a visitors if they know what Umami is. The evolved palate of the Harappans included all kinds of pulses, lentils and spices including garlic, ginger and coriander. Salt was amply available. Their cooking implements, vessels, chulhas and pits were so sophisticated, they even barbequed and distilled. Chatterjee also informs visitors how there might have been hilsa and shutki fish (dried fish). When she reaches the Harappan sites on the Markan coast in the Balochistan province on the map, we learn how the Harappans tamed their camels who could often act fussy. “They made a paste out of dates (seeds) and powdered fish bones. And the mash was fed to the camels to sustain them. They also ate the same thing,” Chatterjee reveals slowly and carefully, waiting to see the reaction. “We shared bread with the camel,” she declares with a hint of pride.

It is to be borne in mind that inhabitants of the middle Bronze age across Asia ate meat. There is  sufficient documented evidence of domesticated animals in the Harappan age; they are believed to have kept sheep, goats, buffaloes, chickens and hunted for animals and wildfowl, apart from consuming fish and shellfish from the rivers and the seas. Also the argument of the additional director general of National Museum, as reported in the Indian Express, that the presence of idols of gods and goddesses, and a relic of Lord Buddha, might make the cooking of non-vegetarian food on the premises a sensitive matter does not hold water. Divinity of the religious kind is not infused in sculptures and art objects, unless these idols are consecrated in temples with proper rituals.

With the ongoing Indus Dining Experience―curated jointly by the National Museum and One Station Million Stories (OSMS)―the premier Institute is flipping the narrative once again in visitor engagement. By opening out its premises to offer a re-creation of the food of the Harappan Civilization with a curated menu, the museum is pro-actively looking at revisiting years of archaeological research and artefacts on the subcontinent's earliest known urban culture. When you think about how the National Museum has one of the most impressive artefact collection on the Indus Valley Civilization―its thematic gallery also displays the famous Bronze Dancing Girl, which was excavated from Mohenjodaro, a Harappan site―a literal re-imagining of the food of the Indus people by experts in the field is not to be missed. The in-house vendor of the National Museum canteen has been shifted out for the duration of the exhibition to allow for a celebrity chef to take over with his Indus Kitchen.

The special Indus Valley menu strictly adheres to ingredients identified by archaeologists and researchers from sites of Indus-Saraswati civilization, culled out by OSMS, a Delhi-based collective of conservation architects. They have attempted to emulate the documented temperature, speed and cooking techniques of this pre-historic time in collaboration with National award-winning chef Sabyasachi Gorai, popularly known as Chef Saby.

The food tasters are for ₹650 and dinner is ₹3,250 for vegetarian menu only.