World Music Day: Can these YouTube playlists boost your productivity?

The effects Mozart, Binaural beats, lofi and pink noise have on the brain 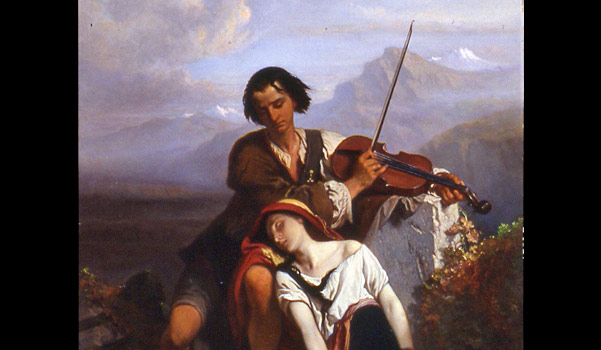 The "Power of music" by Louis Gallait, circa 1852 | WikiCommons

If you are ever feeling unproductive, type “productivity music” on YouTube. Regardless of how the YouTube algorithm has figured you out, the results are going to be diverse.

A two-hour playlist versions of pop songs (paired with advice from Will Smith), a 44-minute playlist of calming orchestral scores, a “super intelligence” binaural music mix, and, of course, the evergreen lofi hiphop radio that stars gently animated anime characters who nod their heads, scribble notes, and look out the windows of their elegantly designed rooms as they, like you, try to focus hard during sustained periods of time.

There is a good degree of science to support the idea that music can make you more productive at work. Much of this began in the early 1990s, with research into what is called “The Mozart Effect,” following a much-cited study from 1993 titled “Music and spatial task performance” (one of the few studies to make its way to the sides of album covers). Many parents took to playing Mozart for their children in order to improve their IQ scores.

However, after it became clear that many other genres of music and art could boost task performance, researchers started questioning whether it was the music itself that made the difference or the degree of enjoyment, mood and arousal that participants had. A 2001 study concluded the latter using statistical methods, causing a shift from perceptions of the “Mozart effect” towards what became known as the “mood and arousal effect”.

With time, it became clear that simply saying “music” boosts productivity would be inaccurate — it depends on what kind of music is playing and how it matches the listener’s tastes, what mood the listener is in, and of course, the willpower of the person to execute their work.

Swedish Music researcher Dr. Anneli B. Haake identified a few factors that can make music help you get work done. A few of these include picking songs with simpler musical structures over complicated pieces, avoiding songs with lyrics that can trigger associations and associating music with work rather than with leisure.

There are other ways of looking at music, besides lyrics and complexity. One popular lens is that of frequency. The hypothesis of “brainwave entertainment” is that the brain responds better to certain “frequencies” measured in Hertz (Hz). From 10Hz to 432Hz, several videos experiment with finding the magic number for tuning your brain to get stuff done, or just to heal itself.

A 2009 study published in the Journal of Neurotherapy identified a 100 per cent reduction in symptoms of depression in patients who underwent Auditory Visual Entrainment (AVE) therapy featuring 20Hz audio therapy, where participants received two weeks of placebo treatment and two weeks of AVE treatment, with their levels of depression and anxiety later measured by Beck Depression Index (BDI) and Anxiety Sensitivity Index (ASI) scores.

The study’s results suggest that these frequencies can alter moods positively. One takeaway, in terms of music, is that people with depression and anxiety could manage stressful work environments better by listening to such playlists.

How YouTube fits into such research is the prevalence of “binaural beat” playlists. These headphones-only auditory experiences refer to audio tracks where two pure sine waves are fed into either ear. The combination of the two creates the illusion of a third sound, dubbed the binaural beat. When you listen to Binaural playlists, simply removing one earphones will remove the “pulsating” effect. Try it and see if your mood improves!

Besides these, there are playlists that feature just noise. While the definition of noise implies it to be an unpleasant sound, “pink noise” is actually a naturally-occurring sound, commonly generated by biological systems such as waterfalls, trickling streams and wind. These frequencies tend to play out in the “background” of your mind when you hear them. This makes them ideal for giving you something to listen to while you work.

There is also a variant known as brown noise, featuring lower versions of the high frequencies found in pink noise. While studies have shown how white noise can help those with Attention Deficit Disorder (ADD) concentrate better, there are not many studies on the role of brown and white noise.

Finally, the most-loved YouTube playlists for work: “lofi”. Also known as lofi hiphop and chillhop, it is a genre of music exemplified by its use of lowercase, sometimes existential track-titles, its animated backgrounds, and the slow tempo and relaxed mood of the track. Popular YouTube accounts like Chilled Cow and Homework Radio feature lofi tracks.

If these YouTube playlists do not do it for you, there are also websites like Brain.fm, which aim to combine takeaways from the existing literature on productivity-boosting music to create an AI-driven service, promising “results within ten minutes” in terms of boosting focus.

So, will the above playlists help improve your focus at work, study or otherwise? Only a personal experience can tell. Ultimately, everyone has a soundtrack that works for them, even if that soundtrack is silence itself.