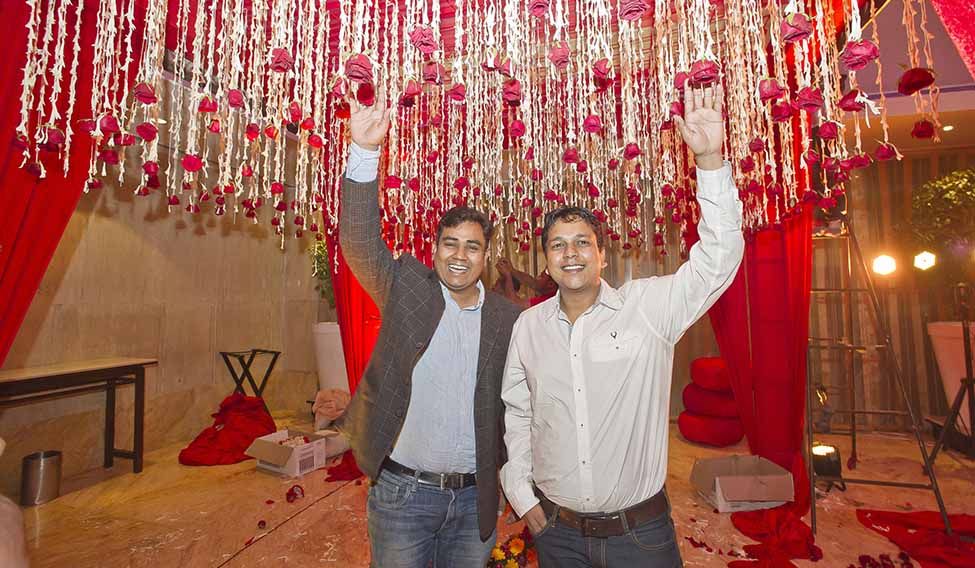 Wedding planners: Garg (left) and Kapsime are looking to transform how couples are getting married in India | Sanjay Ahlawat

On Shaadisaga, you can create your own wedding website and hire caterers, photographers, makeup artists and choreographers

Nilisha Chawla wanted a dream wedding, not one where the royally dressed bridegroom arrives on a pony and the bride wears a designer lehenga. She wanted her special occasion to be different from the typical flashy Indian wedding. The first step was to invite guests without sending out glittery paper cards or e-invites. The problem was solved when a friend introduced her to Shaadisaga, a wedding planning portal. It offered the option of creating your own wedding website and sharing the link on Facebook. On a wedding website, you can share the story of how you met your fiancé, your journey together, pictures, fun moments and responses from guests on whether they will be able to make it.

Kaushik Singh’s wedding has been fixed for July this year. For his father Kapilesh Singh, there are a hundred things to take care of such as organising caterers, decorators and photographers. Shaadisaga offered a one-stop solution to all his problems. The site aggregated a number of wedding vendors so that Kapilesh could choose from the list and bargain for competitive rates.

The Delhi-based startup founded in 2013 by two IIT graduates, Himanshu Kapsime and Manish Garg, is looking to transform the wedding industry in India. It aspires to become the “Zomato of weddings” by offering a marketplace for wedding vendors—photographers, makeup artists, choreographers and DJs. Weddings in India are traditionally planned by the parents of the bride and groom or assigned to wedding planners. But with Shaadisaga, you can choose from a plethora of vendors. You can make decisions based on ratings, reviews and the number of people who have contacted the vendors. The website also features pictures of the vendors’ previous work.

The startup happened almost by accident. At a friend’s wedding, the duo was wondering what to gift the couple. “We came up with several ideas but didn’t know whether they already had it,” says Kapsime. They sensed a business opportunity and thought of starting a gift registry website where couples could post their wedding dates and spell out what gifts they would like to receive. “Remember, in India gifts are mostly forwarded,” says Kapsime. “Dinner sets, coffee makers and bed sheets change several hands.” Even though the idea didn’t work out, it prompted Kapsime to do more research on the Rs2.49 lakh crore wedding market in India. He realised it was fragmented and inefficient and could be streamlined by taking it online.

“When everything is going digital, why not the wedding market?” asks Kapsime. “Technology cannot be seen in isolation.”

“We used to go and stand in front of wedding stores in Delhi like Manyavar and Frontier Raas and ask people about the problems they were facing in organising a wedding,” says Garg.

Shaadisaga launched the vendor marketplace in September 2014 and since then they have added almost 1,000 vendors on their website. Vendors are filtered and approved by the founders. In the last three months, 2,000 couples have used their services. They got their first customer through Facebook, which had just introduced graph search. “We used to search for friends of friends who were getting married and request the mutual friend to suggest the website to the couple getting married,” says Kapsime.

Garg says that the tech-savvy youth are themselves taking care of some aspects of the wedding, instead of depending on their parents. “Youngsters, for example, are more interested in the kind of photographers that are hired,” says Garg. “The bride decides the makeup artist, the choreographer, the mehendiwala and the DJ. So we are promoting these services more.” Shaadisaga’s helpdesk can also be used to assist the couples in choosing vendors.

They started the venture by borrowing money from friends and family and pooling in their savings.

“It is a blessing to have friends who earn well,” says Kapsime. Recently, they got funding from Outbox Ventures—a seed stage focused fund—which helped them expand their team to 14 members.

“Their understanding of the wedding market is great,” says Niraj Singh, founding partner of Outbox Ventures. “The marketplace model is the future; it is scalable and offers the customer varied options.”

The vendors don’t need to pay to list on the website. The wedding website feature is also free. “It was a conscious decision not to make short-term money,” says Kapsime. “But once the platform gains traction, we would like to monetise it.” They are also toying with the idea of allowing premium listings and advertisements by vendors to be displayed on the website. Currently, they are in the process of developing an android app and writing an algorithm to make the platform interactive.

A goofup
There were some technical glitches initially with the wedding website which made some customers unhappy
Childhood dream
I wanted to become an astronaut, explore the outer space
On speed dial
My partner Manish Garg
First office
Garg's flat in Kalkaji, Delhi
Top on to-do list
To go on a world tour with my friends