The world of India's domestic workers 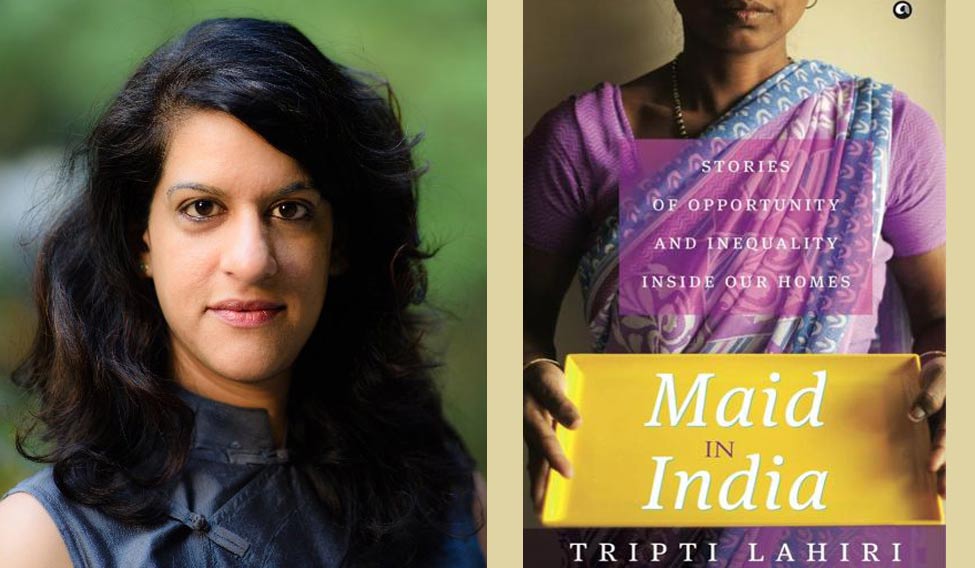 In the decade after liberalisation, there was a nearly 120 per cent rise in the number of domestic workers in India, says author Tripti Lahiri in her recently released book, Maid In India. Women constitute over two-thirds of the workforce in this unorganised sector. They usually come from backward regions such as Jharkhand, West Bengal and Assam, are often barely of legal working age, their wages less than the minimum fixed by the government. Their employers range from Indias elite to its nouveau riche, many of who still believe in the traditional divide between servants and masters. Abuse, mental, physical or sexual, of these women is not uncommon. One such dispute between a family and their Muslim domestic worker led to a riot-like situation in a gated community in Noida on July 12.

Through anecdotal evidence, Lahiri — Asia Bureau Chief of Quartz, a digital media news organisation — charts the sector's trajectory and details the business of brokers and agents and exposes the workers' limited access to justice and formalisation. She also draws from her own personal experiences of engaging domestic help. Excerpts from an interview:

Q: "India has always had servants in some form or the other," you write. What have been the trends over the last century in the sector?

A: In 1931, the Census classified 2.7 million people as 'servants'. By 1971, the Census found just around 67,000 people doing that work. A lot of that had to do with changes like the departure of a large class of people able to hire help — British colonial administrators, for example — and the fact that in the first decades after independence people weren't so well-off and almost all women who stayed home did their own work.

But suddenly, between 1991 and 2001 there was a 120 per cent increase in the numbers of domestic help. It's true that India has seen stagnation, even a shrinking, in female labour participation rates long-term. But because of the immense growth of the population, the absolute numbers of women working outside the home have gone up.

The Census shows the numbers of female workers aged 15-59 went up 17 per cent between 2001 and 2011. In cities, it went up over 70 per cent from around 14.7 million in 2001 to 25 million in 2011. That trend is driving a demand for help. Again, more people are prosperous, so even when women in affluent households stay home, those homes can still afford — and want to — hire help.

Q: Indian women do about 35 hours of housekeeping chores a week while Indian men do two — the worst country ratio. What does this tell you about the country's domestic-service sector?

A: For me, those numbers really highlighted the difference between women and men in India, and the amount of time that women spend waiting upon men. In the period in the 2000s when official statistics noted the numbers of women in the workforce fell, other official studies found that women were doing more unpaid housework. That means if you move out of the paid workforce, you take on more unpaid work at home, which is just considered a part of normal familial duties. Whether you are a professional domestic worker, a housewife, or a white-collar professional, chances are that you are doing a whole lot more cleaning, cooking and childcare than your equivalent Indian man.

Q: More people are educated today than in the 1980s. In 1981 the literacy rate was 43.5 per cent — as of 2011 it was 74.04. The trend is particularly pronounced for women. Despite this, why is the domestic service sector growing at an accelerated pace?

A: I think this has to do with the same trends that I mentioned earlier, relating to greater urban affluence and more women working in cities. There are also more young women enrolled in school than ever before. If they go on to college and work in the future, they are also likely to want to hire domestic help.

Q: Startups and other organisations attempt to bring these informal workers into the formal space, but your book tells us the formalisation process has not been as successful. What are the obstacles?

A: I'd say there are two big obstacles. What people think they should pay is really set by what people around them are paying — basically by the micro-economy they live in. So it can be really hard to convince people to pay more and if they agree to pay a lot more than their peers, they might end up expecting a lot more in return and being less flexible with their workers. Conversely, even though workers might be open to banding together and demanding that wages be at a certain level, they can't control an influx of migrants willing to undercut them and work for less. But if there were more states with a law specifying a minimum wage for these workers, it would help.

Q: In your research how often did you find maids approaching the courts for justice against abuse? What are the challenges they face?

A: Anecdotally I'd say that it's certainly not a first-resort option for women who aren't able to collect pay or who are facing other problems. I'd also say there's a real feeling that the employers are 'big people', and it's going to be difficult to get police to take their complaints seriously. Most often women want to leave a bad situation, rather than file a complaint.

Q: What did your research tell you about the social mobility of this class of labourers?

A: There definitely is mobility but it can take more than one generation to happen. So the child of a young woman who comes to the city as a '24-hour' worker is probably not going to jump into the white-collared classes. But the child of a woman who has been working in Delhi for decades might well be able to. I met a woman in her 50s who started out as a cleaner in her teens and was a housekeeper in central Delhi when we met; her son worked at a top think-tank and, to my mind, is part of the Indian elite.

Q: Why did you focus your research on the Delhi-NCR region?

A: India is a really varied country and people's relations with the help are pretty different, west to east, north to south. But Delhi/NCR is the capital, where its wealthiest and most powerful reside, which is why it seemed to me that looking at how well Delhi handles this relationship was really important, and maybe was a proxy for how India as a whole handles inequality and class.

Q: Which regions of India serve as the main sources of domestic labour and why?

A: The reasons that some states are 'maid-sending' regions and others are not is down to the weakness of the economies of those areas. In the same way that there are multitudes of micro-economies in the capital, the country is a collection of pretty different economies — compare the minimum wages of Maharashtra and Jharkhand. It wouldn't be unfair to compare the wealth of Delhi and its pull on the people of Jharkhand or other eastern states to the dynamic between the United States and Mexico in the 1990s and early 2000s. For the same reason, you might hear people say that there are no Punjabi maids because the state is too rich. That's not entirely true. But because the state is wealthier, their domestic workers are of a more advanced level: They have the knowledge and the connections to find work in Singapore, rather than Delhi. But that's a topic for another book.