Rediscovering Romeo and Juliet in NCR: An experiment in theatre 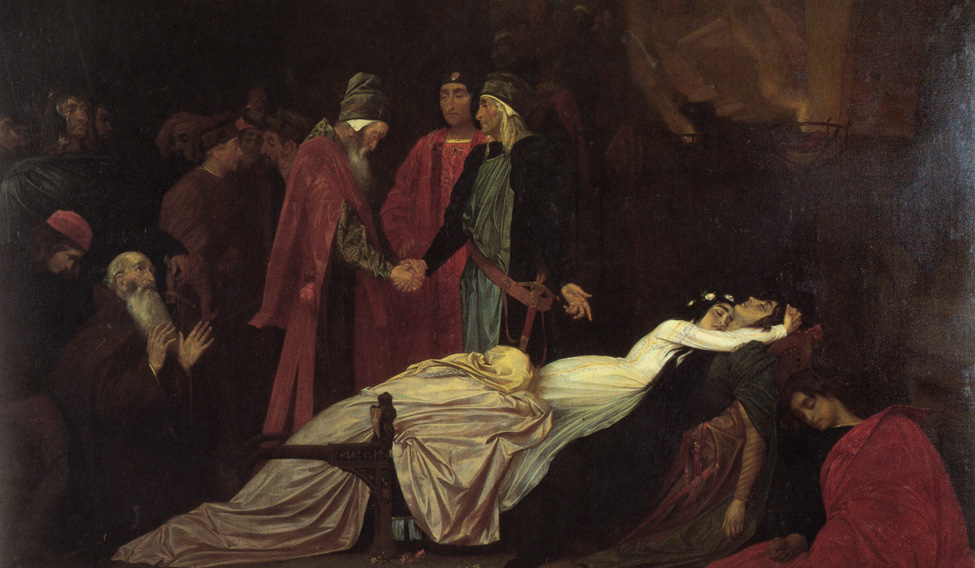 One of the most iconic scenes in the saga, where Montagues and Capulets reconcile over the dead bodies of Romeo and Juliet

Theatre may not be everybody’s cup of tea, but many want to sip it at least once. So, when I decided to engage a group of amateur theatre enthusiasts, aged between 19 and 21, I was not surprised at the enthusiastic response.

Relationships take priority at this age and since the notion of romance is undergoing rapid change, we mutually decided on Shakespeare’s Romeo & Juliet. How does it feel to be a modern day couple living in the NCR, where the cosmopolitan nature of the city becomes the great equaliser? Or, at least, is supposed to be?

Not very long ago, nobody really cared who one was befriending, sharing a meal or even flirting with. It was all a question of hormones and chemistry. Not so today. Suddenly everyone is aware of caste, class and community. So what does it mean to fall in love in a city of immigrants, where one’s background now takes centrestage? And love, which had begun expressing itself openly in the city’s parks after years of suppression is once again being circumscribed by rampaging mobs that ironically take their name from one of the icons of romance, made famous by the bard? Are we re-enacting the tragedy that was written four centuries ago, in another continent?

This was the stuff that our group debated, as they read the original script and then saw its various theatrical and movie representations from Britain, the US and India. We also discussed cases in the NCR where intercommunity love affairs saw honour killings or ends similar to the Shakespearean tragedy. The youngsters, from different backgrounds, felt the topic raised a lot of uncomfortable questions and resonated with their lives.

The academic exploration turned into a creative piece, when a 21-year-old participant, a musician with little or no experience in writing, wrote it as a stage script, drawing from his own and the city’s experiences. Rohan Arora is already a guitar sensation in the Delhi Unversity circuit and has a big fan following in women’s colleges.

The resultant play, What Is In A Name? ...Bahut Kuchh tells the story of a blossoming love between an upper middle class girl, belonging to a politically powerful Haryanavi family, and a middle class Bihari migrant with dreams of becoming a world class musician. This young love-meets-ambition-meets upper caste resistance tale, which also borrows from an infamous honour killing case from the NCR, includes a chorus that becomes the society’s gossips, reacting to the events in the lovers’ lives.

The sutradhar or narrator, is 19-year-old Danish Jaitly, who takes the story forward with his and 20- year-old Sahil Amulani’s original compositions which he sings live on stage. Jaitly runs his own music channel and has recently been 'discovered' by music producers. He and Amulani have won several university singing competitions.

The other singer is Shivangi Chaudhuri, a Bhojpuri star on YouTube, who also plays an important role. The result is an interesting love story, told through a medley of cultures and dialects on stage.

Brought to life through a workshop process, the beauty of the project lies in the fact that the participants examined their own culture and milieu in relation to a famous and universal love story. And through this, have discovered their own proclivities and aesthetics. There couldn’t be a better learning process.