Power between the lines

Parva amplifies the voices of ordinary women and men in Mahabharat A new take: Queen Gandhari and King Dhritarashtra from the play.

For once, she is able to see things with clarity—the devastation of war, the deceit of the throne and the audacity of the lies that surround human life and relationships. Queen Gandhari, wife of Dhritarashtra, the blind king of Hastinavati, is staring at a bleak future as her 100 sons (Kauravas) are now dead. There is gloom, misery, remorse and anger in the Kuru clan.

In Veda Vyasa’s epic, the Mahabharat, Gandhari is the virtuous woman who blindfolded herself when she finds out that the man she is going to marry, Dhritarashtra, was born blind. In Parva, the latest theatre experiment of Mysuru-based Rangayana, a government-funded repertory, Gandhari yields to Krishna’s request and removes the scarf blinding her eyes and confesses her darkest secret before the world. “I blindfolded myself out of contempt for my blind husband as I was coerced into marriage by Bhishma, my father-in-law,” admits Gandhari.

Parva, the seven-and-a-half-hour play adapted from the eponymous novel by renowned Kannada writer Dr S.L. Bhyrappa, has been directed by Prakash Belawadi. The audience response has been overwhelming for the long-format drama with three coffee breaks and a lunch break. It is a landmark production, which has witnessed the 800-seater Kalamandir in Mysuru running full house since the first show on March 12.

“In my last four decades in theatre, I noticed Maharashtra, West Bengal, Kerala, NSD Delhi and the Bhopal Rangmanch have had a strong presence in Indian theatre with their unique experiments,” said Addanda C. Cariappa, director, Mysuru Rangayana. “After I took over as director a year ago, I was keen to produce a play that could draw attention to Kannada theatre. Rangayana has previously produced plays based on legendary Kannada writer Kuvempu’s Malegalalli Madumagalu and Sri Ramayana Darshanam. I chose S.L. Bhyrappa’s Parva for its sheer strength, progressive thought, strong message and appeal.”

Bhyrappa readily agreed to Belawadi directing the play. Cariappa said the team started work on the script during the lockdown and Bhyrappa not only approved the script, but also sat through four rehearsals to fine tune it. He added that Parva is the first adaptation of a modern retelling of the Mahabharat in Indian theatre. In 1985, British playwright Peter Brooke’s Le Mahabharata was staged in France. 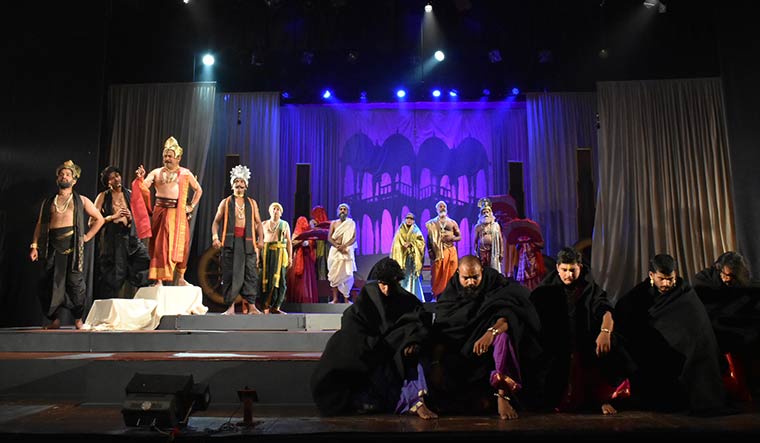 Grand opening: A scene from the play Parva.

In a first, the Karnataka government has announced a grant of Rs1 crore to take the play across India. “We plan to tour the country,” said Cariappa. “The play has three parts—Adi, Niyoga and Yuddha parvas. It will be staged as separate episodes of two hours each from Thursdays to Saturdays and in the marathon format on Sundays.”

The challenge for Belawadi was to transform a 696-page literary work into a play that could be narrated within a few hours, with a small team of 32 actors, 10 technicians and five musicians. Each actor is playing more than 10 roles, as there are more than 120 characters in the script.

The novel was conceived by Bhyrappa during a casual discussion with a friend. During his travel to the Himalayas, he was intrigued by a village in the Gadhwal region that practised polyandry. The locals claimed it was a tradition since the “Draupadi era”. Bhyrappa was engrossed in his research on Vyasa’s epic for the next five years, as he tried to comprehend the last phase of the Vedic period, its social, economic, religious and political facets. Subsequently, he extended his travel to places that found mention in the Mahabharat. It took him another 14 months to write the novel. 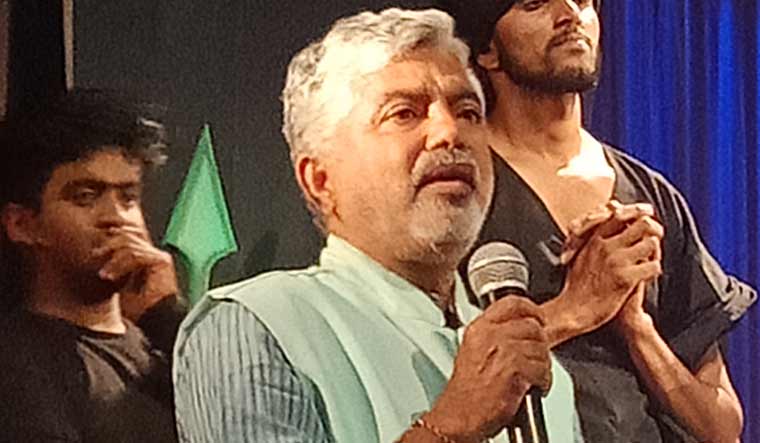 “I tried to imagine the magnitude of the war and the size of the army from the expanse of the battlefield,” writes Bhyrappa in the introduction. “Though we believe that Pandavas fought to uphold dharma (truth), I realised a sizeable majority fought against the Pandavas in the ‘Dharma Yuddha’. So, I decided that my story of the great war will not just focus on the Arya dynasties, but also on the non-Aryan clans, their traits and the impact of war on their lives.”

“Parva is the extreme of consciousness narrative,” said Belawadi. “It is a monologic narrative translated into dialogue, to make it a human drama.”

Bhyrappa’s novel has seeded new thought and new interpretation of the Mahabharat. The adaptation has a strong narrative that amplifies the voices of ordinary women and men in the epic, who were overshadowed by the powerful heroes. Here, time is the enchantress and the rest mere pawns.

The characters in Parva, be it Krishna, Bhishma, Karna or the Pandavas, are more human than divine. Parva approaches the Mahabharat as history and not myth. The play opens symbolically with the last scene in the Mahabharat with a blindfolded Gandhari freeing herself to see a post-war Hastinavati, as though hinting at the audience to take another look at the popular story with a new perspective. Parva unravels the unspoken travails and tribulations of Draupadi, Gandhari and Kunti, which are missing in Vyasa’s Mahabharat.

The stagecraft and the minimalist stage help you transcend time and space even as the play oscillates between the past and present to establish the link, familiarises you with the kings, kingdoms, warriors, landscapes, minds and mannerisms of people, the socio-political hegemony and the politics of discrimination.

The format of the play engages the audience by stirring debate on ethics, morality and justice. The wavering stance of the allied kingdoms when asked to choose between Pandavas and Kauravas in the war opens up a debate over what is dharma (truth) and adharma (non-truth). It also mocks the social order that accords high status, power and privilege to the sons of the king and queen but denies dignity to the sootha putras (born to the king and his slave).

To accusations of Rangayana propagating the BJP’s hindutva agenda by promoting the work of a rightist writer, Cariappa responds: “We chose Parva for its progressive thought. You may call Parva as a leftist writing by a rightist writer. The story has a feminist perspective, a strong voice questioning the social order. It deals with consequences of war as devastating not just to the powerful kings but also to the commons. Art is always democratic.”