Assam forest turns into playhouse for a theatre fest 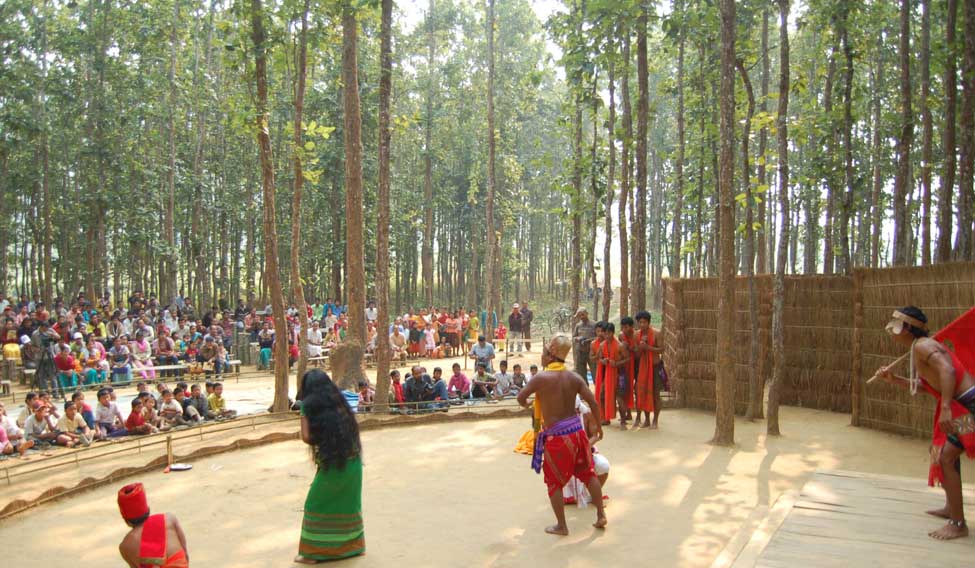 Amidst lush greenery and sal trees reaching out to the heavens, an annual theatre festival with an eco-friendly agenda does away with microphones, acoustics, control systems, drapery or any fancy stage equipment.

"It is a meditation of theatre expressions," the organisers said.

Conceived in 2008 to provide a unique platform to develop a trajectory of eco-theatre, the 10th edition of "Under The Sal Tree" that was held at Baddungduppa Kalakendra in Rampur village here explored the performative dimension of ethnic cultures by bringing together theatre artists from across the country.

It was organised by the Baddungduppa, the only theatre group of Assam's Rabha tribe.

"The festival is yet to mark its presence in the world cartography. We are committed to decipher the strings which once bound man and nature in an organic unity and which in the face of the intrusion of materialistic tendencies now, remains relegated to a forgotten sphere," said festival director Sukracharjya Rabha.

He said the festival is an untiring effort towards developing new aesthetics of theatre and performing arts.

There were three performances on each day of the three-day festival, followed by discussions moderated by journalists and noted theatre artists.

What stood apart was certainly the natural atmosphere created, with audiences sitting on environment-friendly benches made of betel nut trees and bamboo, and trees all around the venue. There was live music during performances.

Rabha said no trees were cut to make space for the shows. "The space is given to us by nature."

The festival kicked off with a performance by the Baddungduppa group. The play was conceptualised and directed by the festival director himself.

He presented an adaptation of "Rather Rashi", in which Rabindranath Tagore foretold that only Dalits could lead the polity and the Ratha (chariot) will move ahead only when the reins are in the hands of untouchables.

Been presented in Assamese and Bengali, it was certainly not comprehensible to all, but the direction and the thematic development of the plot impressed everyone.

It was one of the best productions of the festival.

The last play on the first day was another performance to look forward to. An alumnus of the National School of Drama, Savita Rani, involved the audience in her solo act -- an impressive critique of the patriarchal, sexist society that expects women to behave in a certain way.

A part of her recital touched upon the right-wing Hindu nationalists' campaign of saffronisation. "I am against injustice of any kind; that is why I thought of addressing multiple issues through my act," said Rani.

She deliberately took up an Italian accent as she presented the play in English. "My English is not that fluent. So, I thought I would take up a different accent so my language doesn't come between me and my audience," she explained.

Another play that stood out was an adaptation of American playwright David Henry Hwang's The Dance and the Railroad.

Staged by the Manipuri Inter-Cultural Theatre Company, the play, through a stylised form of martial arts, depicts a strike in a railroad labour camp in the mid-19th century.