The CM, Veerappan and I 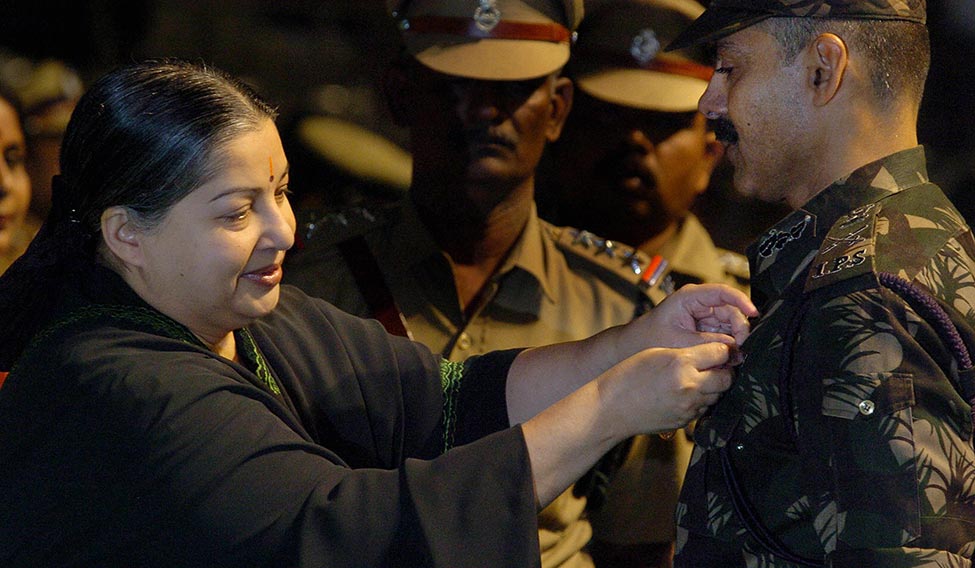 A protectee's loss at any point of time—even after the body guarding role is long past—is always traumatic. It is a very special equation.

My first impressions of Madam J. Jayalalithaa, right from the time I headed her Special Security Group in the early nineties, remain etched in my mind: charming and clear-minded.

I met her first in June 1991. She would not utter even a single unnecessary word, and she remained that way all along.

While taking charge of her security, I had expressed the hope that she would help me optimally use the skills and training I had. She unhesitatingly said yes, but with a caveat. “My vocation is public life, and that oxygen supply should not be choked by the protector's zeal,” she said.

We thereon struck an amazing understanding on the mode of security. She was an extraordinary protectee, and I had the finest bunch to help my job—the cream of Tamil Nadu Police.

In 2001, I was made the commissioner of Chennai, where the police had to handle various hierarchies of goons. Jayalalithaa never got into the nitty-gritty, but the mandate was lucid: “Law and order should be maintained well”. And she gave me great latitude to work.

Her interactions with the police were almost unilateral—mostly about meeting our endless demands, such as increased allowances and additional patrol vehicles.

The biggest mission in my career came in 2001, too, when I was called back to Tamil Nadu from a Central deputation as the inspector-general of the BSF in Kashmir. I was made additional director-general of the Special Task Force formed in 1993 to end the Veerappan menace.

As I called on the chief minister, she said she was “sure that the operations would fructify”. The rapport we had was fantastic. I could access her anytime, but I seldom did. I never bugged her with petty progress updates, and she, too, was not interested in sitreps [situation reports]. That showed her faith in us.

Former STF chief Walter Devaram had made some demands, and she promptly said yes to all. I lengthened the catalogue of demands, which was granted post haste. My requests for latest weapons, night-vision equipment, sat-phones, etc, were all cleared in a jiffy. The per capita holding of sophisticated equipment under the Tamil Nadu STF was more than most other comparable forces.

It might come as a surprise to many that we never briefed Jayalalithaa about the end game—Operation Cocoon—till the mission was over. We planned many ops, but refrained from informing her, as it could have spiked hopes and boomeranged on us if the plan failed.

She was also not the 'give me blow-by-blow account' type. Her approach towards me was: “I trust you, it is up to you to deliver.”

Jayalalithaa was more determined than any other leader to end the Veerappan menace. Her stand was bold and apparent—'it needs to be stamped out'. She was resolute like nobody else.

Finally, after we gunned down Veerappan on October 18, 2004, I called her, and she conveyed a big pat to my boys, the Karnataka troops and myself in a warm and elated tone.

It was as if she had been with us all along in the protracted hunt. It is that ability to evoke such feelings that makes a leader really powerful.

The writer was chief of the Special Task Force that shot down forest brigand Veerappan. He is now senior security adviser in the Union home ministry.

As told to S. Neeraj Krishna