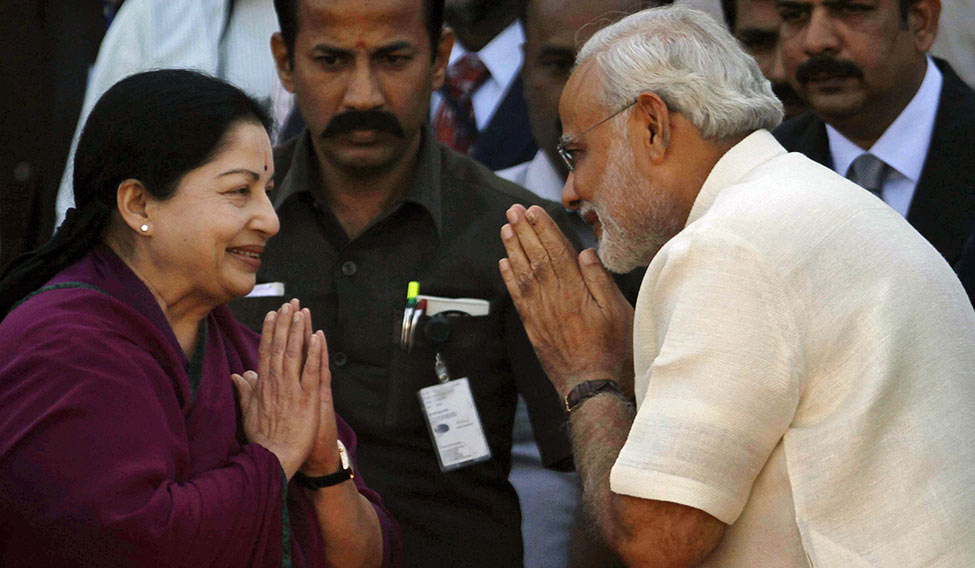 Two images of Jayalalithaa’s funeral stood out: Prime Minister Narendra Modi embracing an inconsolable O. Panneerselvam and putting his hand on Sasikala’s head as a patriarch. Modi, who shared a good rapport with Jayalalithaa, will be closely engaging with the two most powerful persons in Tamil Nadu, as his party looks for opportunities to make inroads into the Dravidian heartland.

The saffron party, perceived by the Tamil people as the party of Brahmins, has long been on the margins of mainstream politics in the state. Even Jayalalithaa, an Iyengar Brahmin, was buried, in keeping with the non-brahminical traditions set by leaders like C.N. Annadurai and M.G. Ramachandran. The organisational reach of the BJP, and even that of the RSS, has been limited to a few upper castes. “Right now, there is no state leader in the BJP who can be accepted by the people of Tamil Nadu,” said Subramanian Swamy, BJP’s Rajya Sabha member.

In the assembly elections in May, the BJP could only garner 2.8 per cent of votes—a sharp drop from the 5.56 per cent won in the 2014 Lok Sabha polls. Highly placed BJP sources said the party was, for now, content to let the AIADMK and the DMK fight it out between themselves. It will look for a suitable opening to align with a dominant group in 2019, when Modi would seek his second term.

The BJP’s strategy for Tamil Nadu can be compared to what it did in Assam. Despite espousing the cause of Assamese Hindus against the influx of Bangladeshi migrants, the BJP had remained at the margins of Assam politics in the 1990s, when Prafulla Kumar Mahanta’s Asom Gana Parishad and the Congress ruled the state. The BJP aligned with the AGP in the 2001 assembly elections and, 15 years later, it had its own chief minister in the state, with the AGP supporting it. In fact, Chief Minister Sarbananda Sonowal started his political journey as a student leader of the AGP.

“Situations change,” said a BJP leader explaining the party’s longterm strategy for Tamil Nadu. “Look at how the BJP emerged as a force in Assam after forging suitable alliances.”

Said a senior BJP functionary: “Tamil Nadu is also a religious state, with temples and religious leaders who command a strong influence on several communities. The BJP has been engaging with them.”

BJP national general secretary Muralidhar Rao, who is in charge of party affairs in the state, has been tasked with seeking the support of various caste and religious leaders. He has been taking several groups of people to meet Modi and party president Amit Shah.

Swamy was one of the first BJP leaders to take a shot at predicting the post-Jayalalitha politics in the state. “The AIADMK will head for a split, following a tussle between Chief Minister O. Panneerselvam and Jayalalithaa’s confidante Sasikala,” he said.

Other BJP leaders, however, are willing to wait as Tamil Nadu is too important a state to be lost to ham-handed manoeuvres. Unlike after M.G. Ramachandran’s demise, they point out, Jayalalithaa has left the party in a better position in terms of numbers in Parliament and the assembly.

The BJP would need the AIADMK’s support in next year’s presidential and vice presidential elections. The saffron party would watch how things would play out in the next one and a half years, and whether the AIADMK would be able to hold itself together.

“There is now a vacuum after the major leader departed,” said BJP spokesperson G.V.L. Narsimha Rao. “We believe that the AIADMK and the DMK would continue to play a dominant role in the state. But, as far as the BJP is concerned, it is focusing on the 2019 elections, where we will perform well.”